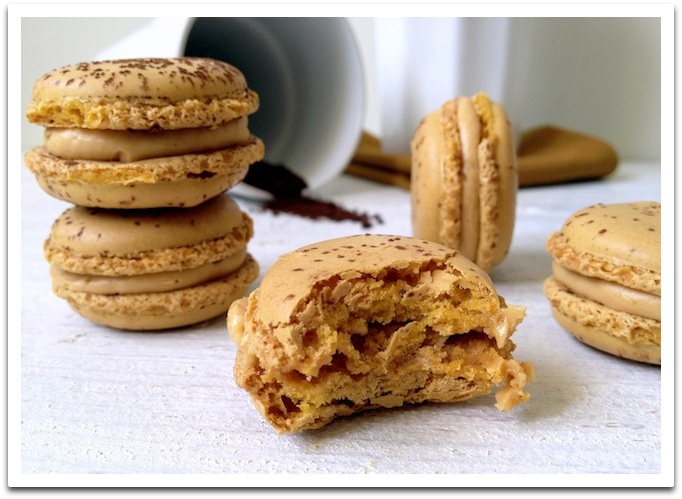 "Don't let anyone tell you're unable to do something, or if I want to." If you have a dream, you must keep it. If you want something, salt to search it, and point. Do you know?, people who fails to achieve his dreams often tell others that they will not meet yours"

(from the film"In search of happiness")

For a week of film and festival we have in Malaga a year, does not deserve less chance that prepare these... film Macarons!. The Festival de Málaga, which is actually called Festival Malaga Spanish Film (FMCE), it is a cinematographic exhibition held annually in the city since 1998. Do you want to come? 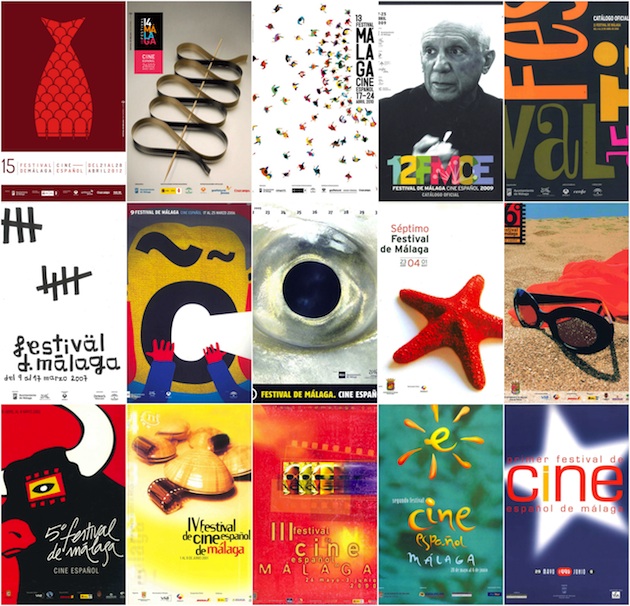 In addition to projecting most important releases of the year of the Spanish cinema, the best films of the year are rewarded and granted several honorary awards. To celebrate each of these awards, the Festival emits films and most important short films all of them. 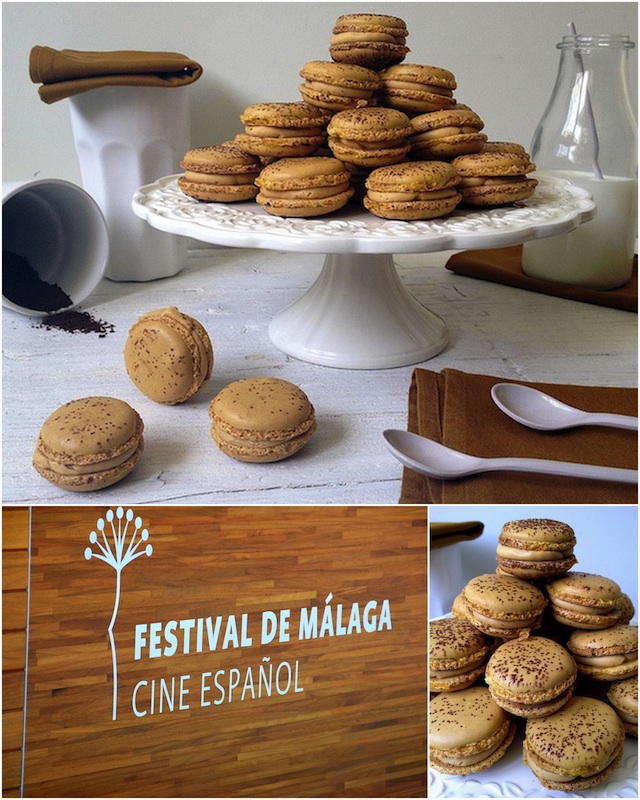 The main award is the Golden Barrel Cactus (flower that is a hallmark of the city, and is made with the stem of a cotton Thistle with jasmine flowers and smells that he falls). The jury varies every year and is always formed by actors, screenwriters, producers, directors and other professionals of the Spanish cinema. 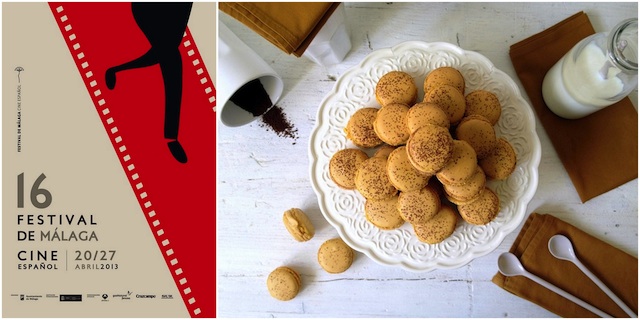 The Festival takes place in different parts of the city (Teatro Cervantes, Echegaray Theatre,) Albéniz CinemaRoom Alameda,...) that during those days are you adorned especially for actors and directors of the film, showing its face more friendly and cultural, to feel all visitors and Media Showcase. Also joining the event different cultural, musical and culinary initiatives which, together with the presence of the stars of the big screen, flooded Malaga film taste all over the city. It is a very good opportunity to enjoy of the pleasures which exhibits always the capital of the Costa del Sol. 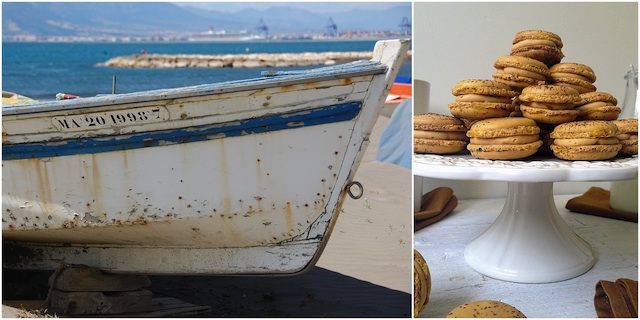 In gastronomic terms, in addition to the numerous events and references in the MAF and the FMCE, nearly five hundred Malaga catering establishments joined in the initiative "A plan of cinema". "Jamón, Jamón", "The red carpet", "Morena Clara" or "Bigas Luna" will be the names of some of the created covers in Exclusive for the occasion. As it could not be otherwise, this Film City had to put a film brooch... and I came to join the event by casting a nod with these Macarons with salted butter and caramel cream... of cinema! 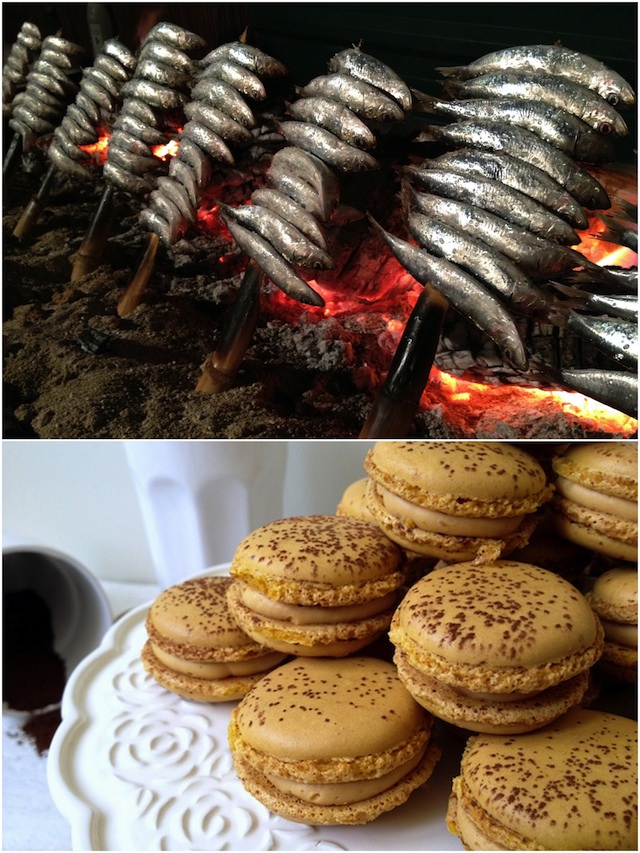 I tried them on my last visit to Paris, in Pierre Hermé. They are delicate and very original flavor. It's like eating a toffee with subtle salty It creaks. Delicious, are a hit whenever I prepare them... Salt butter & Caramel Macarons. I hope you like them and you tell it to me. Now... Let's work!. 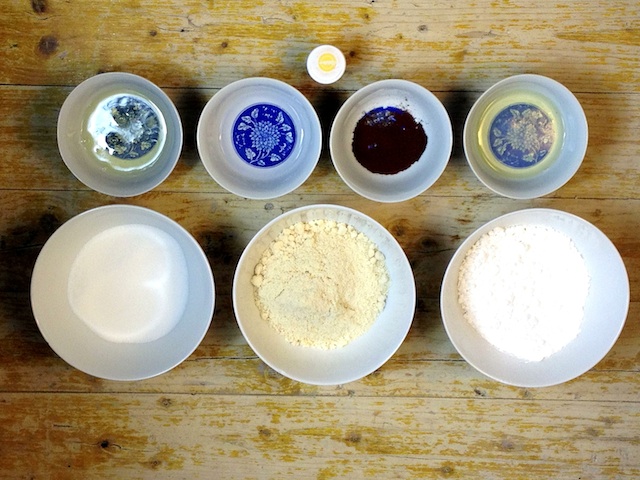 For creme caramel with salted butter:

Total €2.73 or what is the same cost of €0.078 per macaron. Nothing compared to the pleasure that awaits you!

It is a typical sweet of the snack, I would recommend you that the tomarais with a tea, coffee or tea. I recommend one of my favorite teas: Twinings Chamomile and honey (Camomile and Honey). A tea without caffeine of delicious flavor. The price is €2.40 box of 20 sachets, i.e. €0.12 per Cup. A Cup so delicious you want to repeat non-stop, and only 4 calories per Cup. For comprensar!.

1 preheat the oven to 175 ° C convection function. (If you don't have a convection oven or want to have more basis, I refer you to the tutorial Macarons: my secret incofesables) 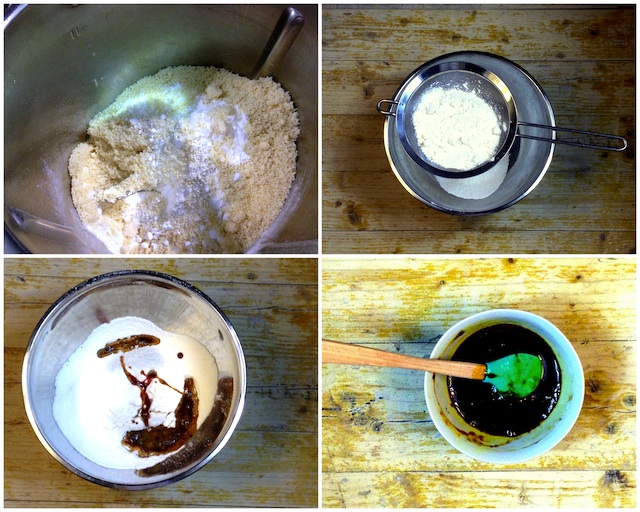 2 spray a few seconds the almond powder to get the possible finer texture.

4 make a hole in the center of the Bowl leaving some of the flour mixture and powdered sugar at the bottom, and tip the 55 g of egg whites with soluble coffee and combine with the spatula. Add coloring and mix well, making sure that it is not anything on the walls of the bowl without mixing. Book. 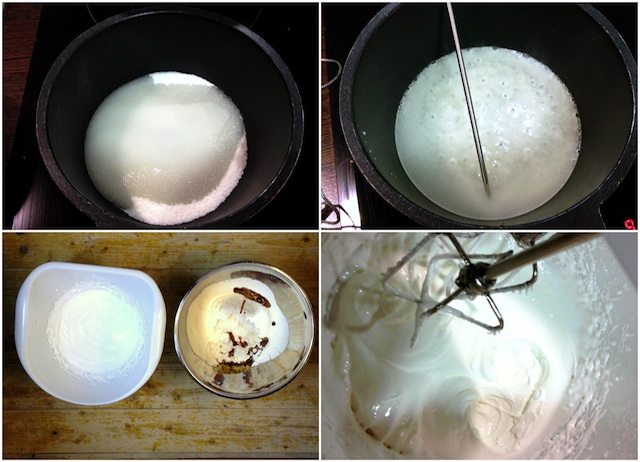 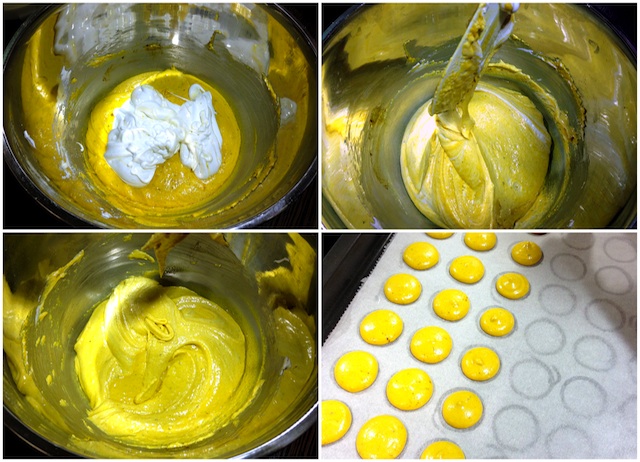 10 lower the mixer speed to medium-low power and add the syrup little by little. The meringue will come down but is normal. Then increase mixer speed and beat for about 5 minutes. After that time, the whites should be firm and shiny and although Bowl will still be warm to the touch, merengue temperature will be lowered to room temperature. If it is not, continue beating until the temperature has fallen. 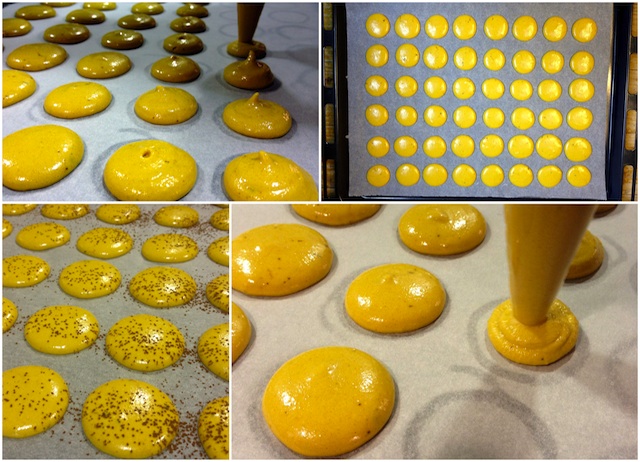 14. Insert sleeve filled to 1 cm above the oven plate and begin to press the sleeve by moving it circularly until we fill the circle. Stop pushing the sleeve. Lift and move to the next circle. Sprinkle with the help of a colander with a little cocoa powder. This operation is optional and does not add flavor to the macarons, but they are very beautiful.

16 let stand the macarons 30 minutes, even if I just let them stand for 5 minutes and they came out fantastic. 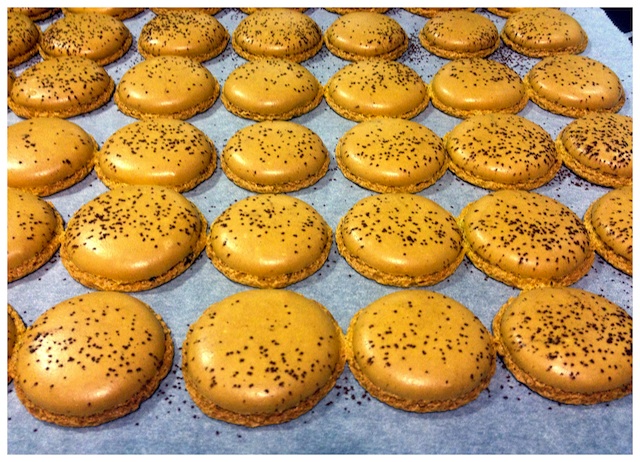 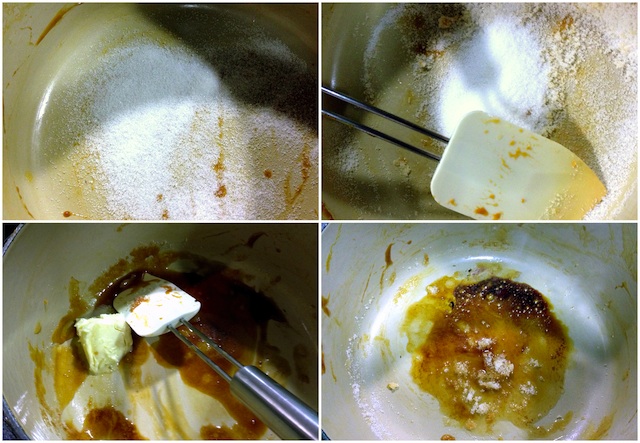 21 put 50 grams of sugar in a saucepan to make candy. Let the sugar melts and then add other 50 grs. repeat the operation with the remaining 50 g of sugar.

22 let make the candy until the caramel has a golden brown color. Remove the Pan from the fire.

23. with great care not to burn us, add salted butter and mix well. Gradually add the boiled cream. 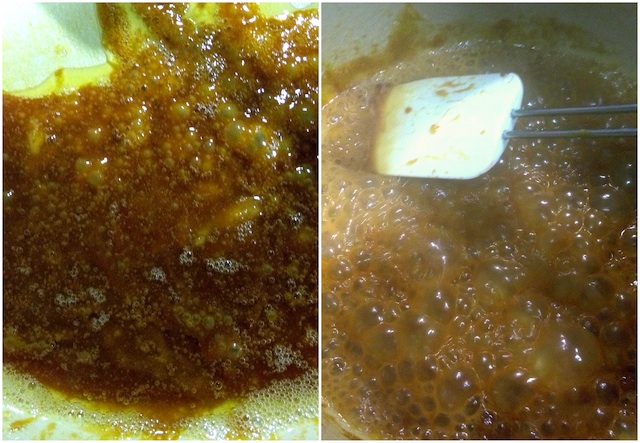 24 return the cream to the fire and cook cream until it reaches the 108 °. Pour the cream on a heat-resistant Pyrex (because the cream will be boiling). Let cool and cover with plastic wrap. Place in the refrigerator until the cream is completely cold. 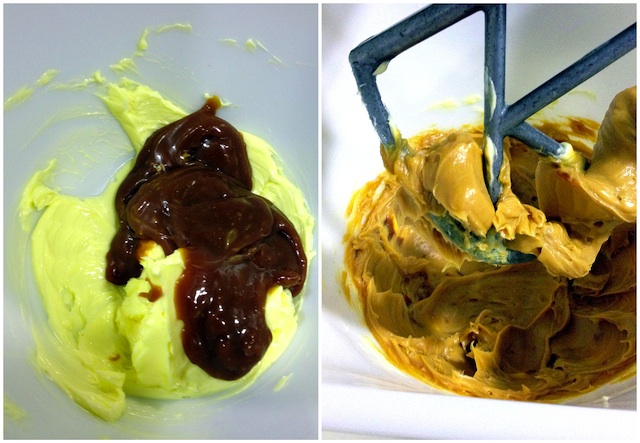 25 put the butter without salt in bowl of electric mixer and beat on medium for 10 minutes speed until creamy.

26 incorporate half of the caramel cream and continue beating until well blended. Then add the other half half of the cream caramel and whip until the cream is homogeneous.

27 pass cream salted butter caramel one sleeve pastry with smooth nozzle and fill the macarons. If the mixture is too soft, put it in the fridge a while so it take a little bit of body.

28. once filled, or well spend the macarons in the freezer, which is better than taking them directly (I refer you to the tutorial Macarons: my shameful secrets) either store them in the fridge for a few hours. If you pass them in the freezer so they can acquire their maximum flavor, you can keep them frozen 24 hours to 15 days. When you go them ye eat, descongelad them 3 hours in the fridge and then 1 hour at room temperature. !Ready to eat and... enjoy!.

Thank you for your assistance. Do you you think?

Leave a Reply to No only dulces Cancel reply