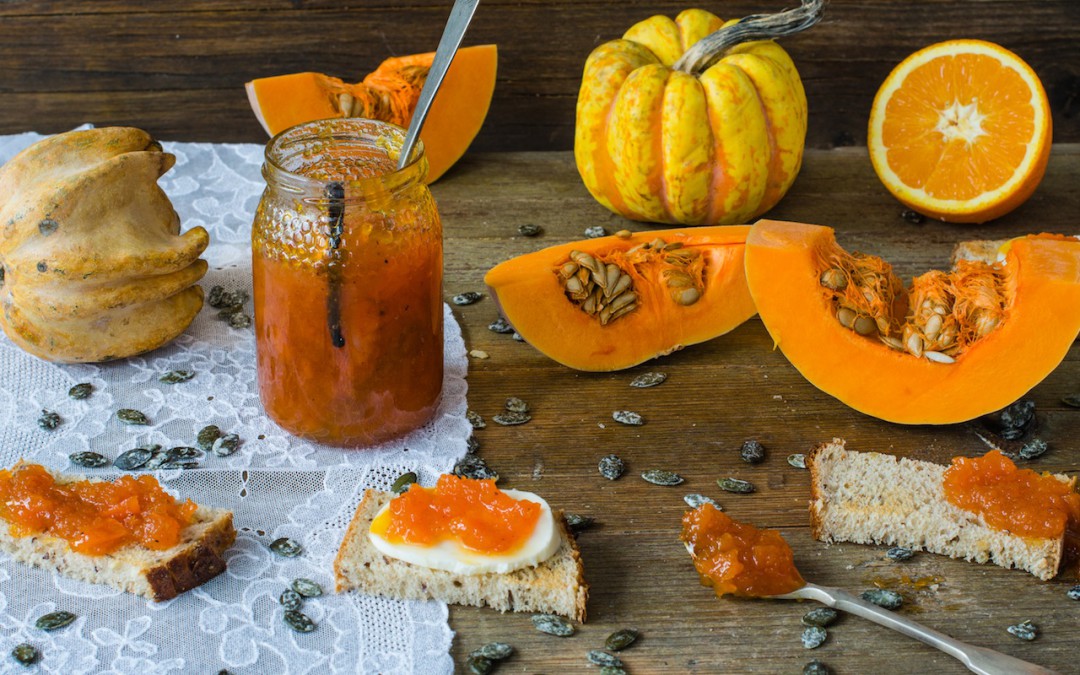 We start today's Römerberg, the surprise of Frankfurt to then make a jam of pumpkin with vanilla that you will not forget and will want to do all the time. 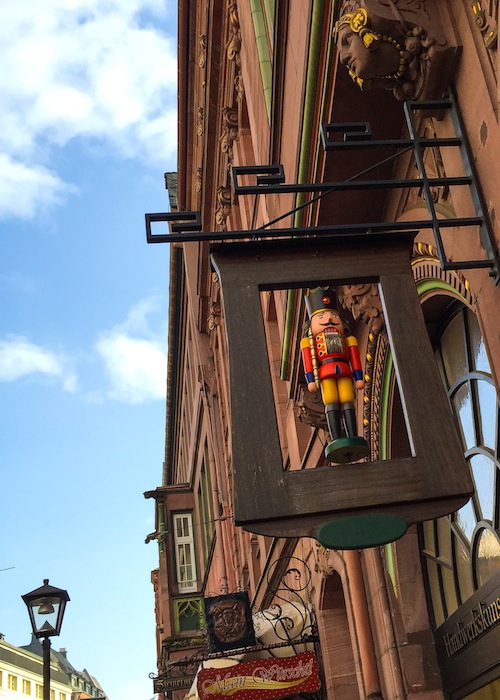 But we started with Römerberg, the surprise of Frankfurt and one of the most important squares in which you will feel yourself transported to another era. Römerberg, is the center of the city, in the old town, and among its buildings there have been coronations, fairs and many markets. 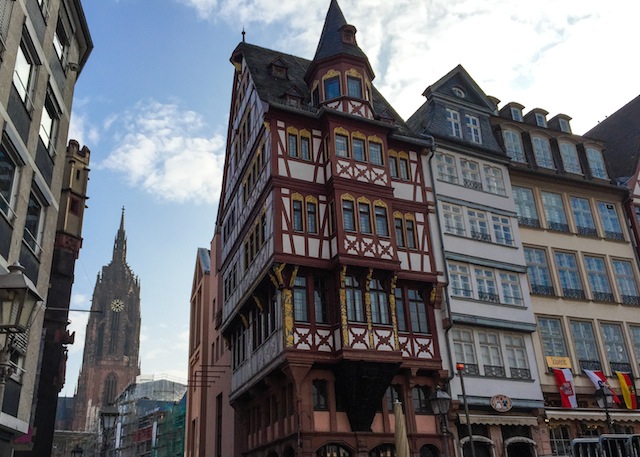 World War II almost finished with it, but it was rebuilt and the result of this reconstruction is what we see today, and in the Centre a copy of the Fountain of Justice (Gerechtigkeitsbrunnen, beautiful fountain and nice name). But when the square is completely irresistible is in the month of December when its Christmas market takes place and every corner smells of cinnamon and lemon and lots of smoking pots of mulled wine are all over the place, and there's no doubt that Römerberg, is the absolute surprise of Frankfurt 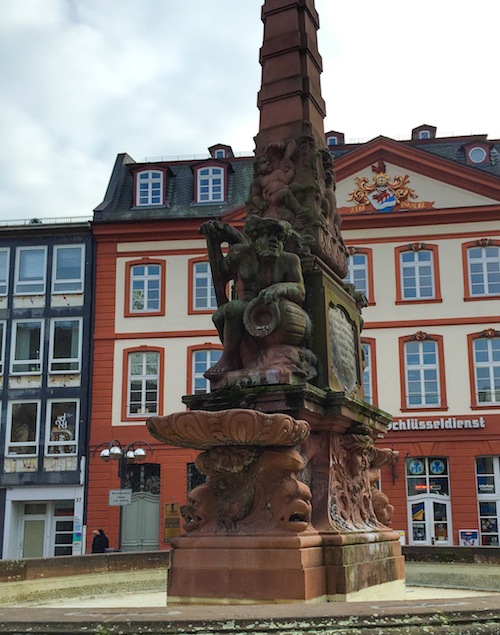 But we begin our walk through the square from Nikolaikirche, a small Gothic church that seems out of the tale of Hansel and Gretel. White and red with the green roof is the Church of the old town of Frankfurt am Main. Its patron is Saint Nicholas, the patron of merchants and is part of this pretty square that is worth the walk through the old town.

The Rathaus Romer to been the city town hall of Frankfurt for six hundred years. It is form of three almost equal buildings with the staggered facade in light pink color. Zum Römer is what gives the name to the entire building and means "at the place of the Romans" and refers to the Roman settlements on which the building was risen, The building on the left is called Alt-Limpurg and the one on the right Lowenstein. 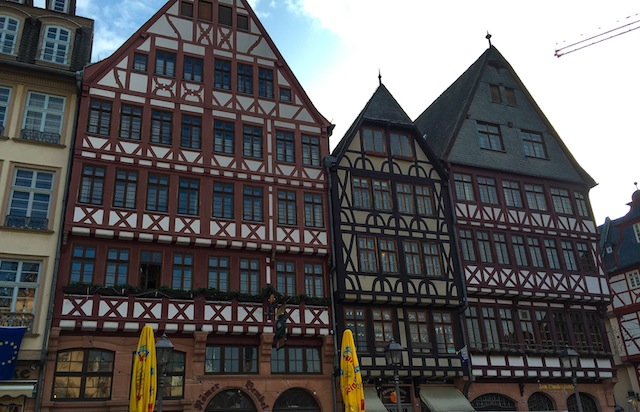 In front of it, there is a group of seven wooden houses called Ostzeile, some houses with exposed beams that are a example of the German traditional architecture of the 15th century. Each House has its own name and one of them is today the headquarters of the Frankfurter Kunstverein (Union of artists). All were rebuilt after the second world war, and form a beautiful picture. Römerberg is therefore my surprise of Frankfurt. 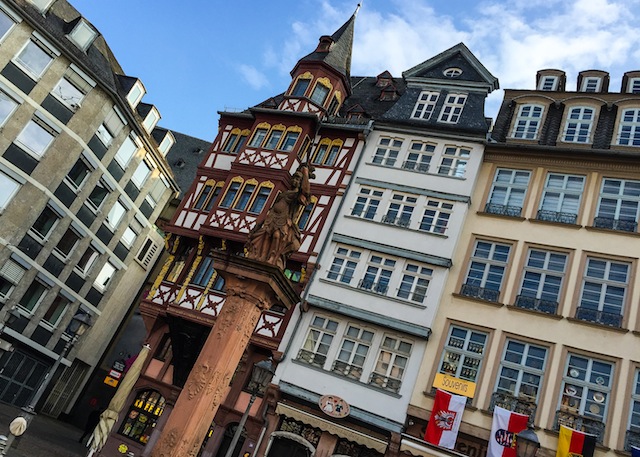 The Historisches Museum (Historical Museum) Closes this square in which one wants to stay forever and relive its years of glory for centuries. 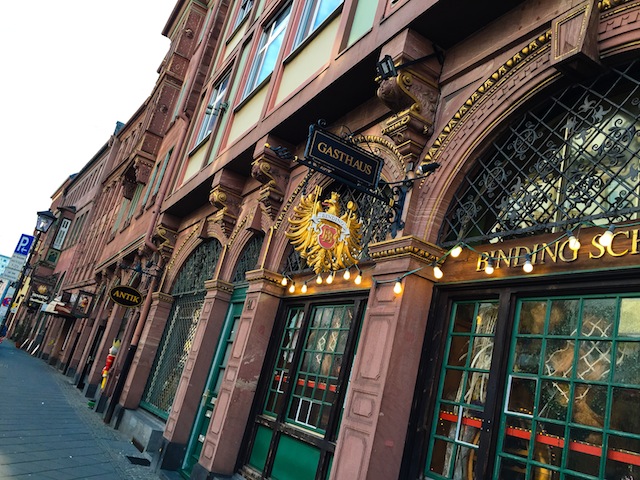 And after this visit to Römerberg, the surprise of Frankfurt, we are going to prepare our jam of pumpkin with vanilla and orange is one of my favorites. Orange combines very well with the pumpkin and vanilla from da u touch delicious that I love. We could actually say that I am addicted to the vanilla and that use it a lot, sweet and savoury recipes, but this jam is the note that makes the difference.

They had given me a super squash and what to do with it? We have already made several creams and cakes but no jam, so I did not hesitate and I decided on this jam of pumpkin with vanilla. In addition, pumpkin jam is a favorite of my mother so decided I started to prepare it, and I was discovering that adding a bit of orange juice to the jam and a teaspoon of vanilla, would mark the difference of this pumpkin and vanilla jam.

The best thing of doing jams is how easy it is to make. It is a great way to take advantage of the remains of fruit (although I admit that I buy fruit expressly for making jams many times), and you can do all (those of vegetables are also of death, as the red peppers which I love). To make them always use my Tala Cooking kit for jams, with a funnel for jam that makes it very easy to fill the jars, and a wooden spoon which helps me to get the desired textureby mixing the fruit while it is cooking. Today this jam of pumpkin with vanilla, brings the sweet note to our post. do you dare? You will not regret it! 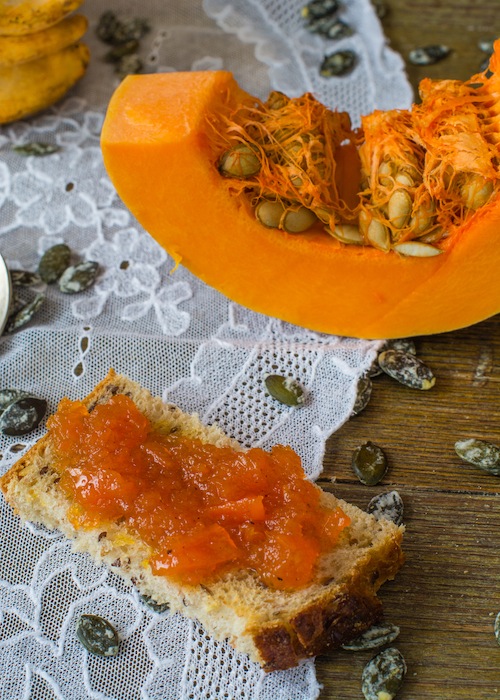 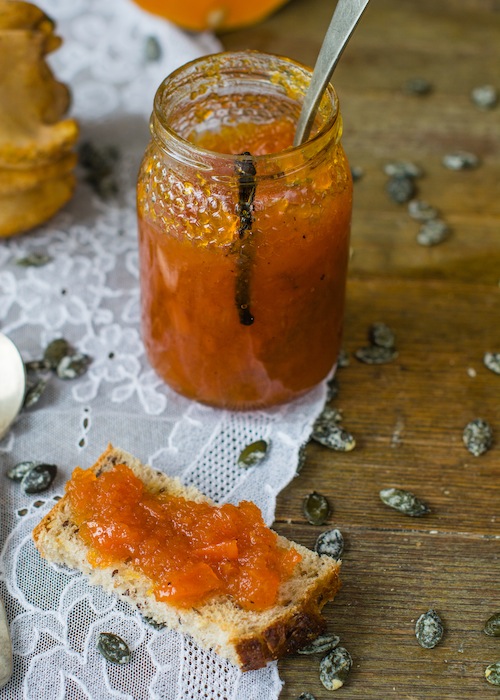 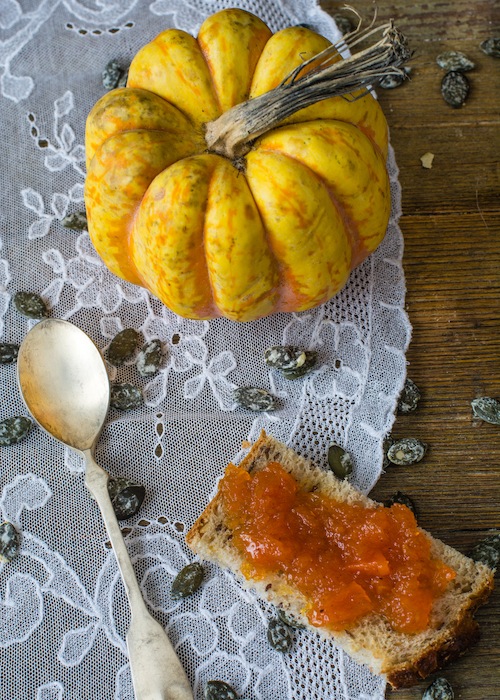 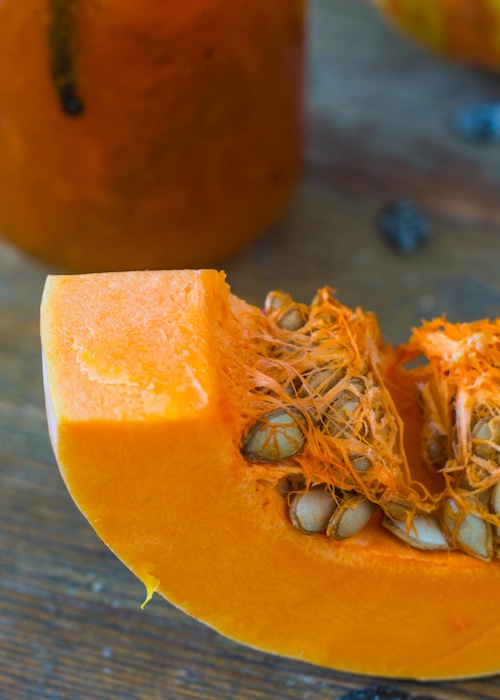 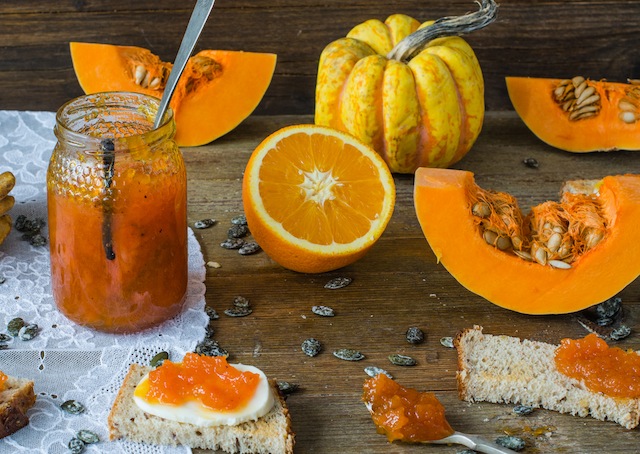 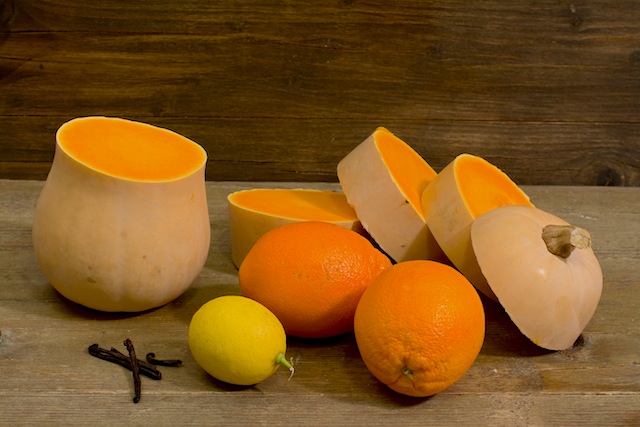 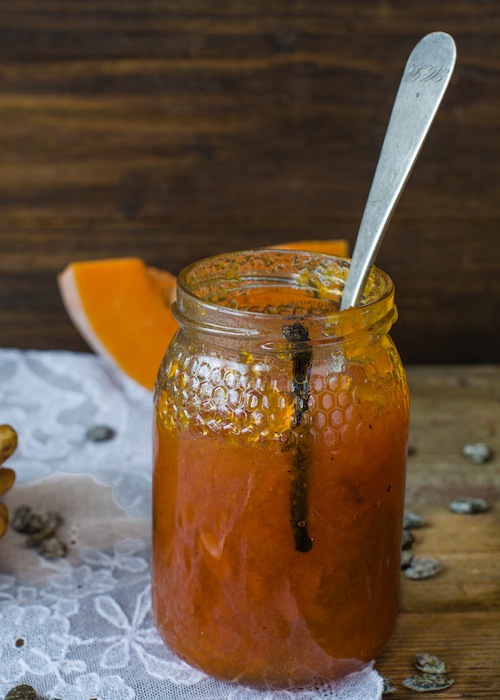 Total €6.07 per about 5 jars of jam that is going to be the best that you've eaten, i.e. €1,21 per each jar. Utensils used for preparing the jam are from from Tala Cooking. In love with the jam funnel that I use all the time.

1. In day 1 prepare the pumpkin. For me, the easiest thing is to cut it into pieces, remove skin and seedsand any trace of fiber or filament.

2. Chop pumpkin into strips with a sharp knife and put it in a large bowl, add the lemon and orange juices, sugar, and vanilla paste and pods to pumpkin. Move to mix and cover the bowl with plastic wrap. Leave to marinate overnight in the refrigerator.

3 In day 2 - put the fruit in a large saucepan and simmer, mixing from time to time. Remove from heat and allow to cool completely. If you prefer you can let stand another day in the fridge.

4 Return tthe marmalade o boil at medium fire for about 15 minutes, removing the foam that may form on the surface. Increase the heat to medium-high and boil until it reaches the temperature of 105 degrees. Then the pumpkin will be transparent and with a beautiful color

5. Meanwhile put jars to sterilize, both the glass vial and their corresponding covers. So we can sterilize them in the micro: wash jars thoroughly. Dip so that its entire surface is coated with a film of water and put them in the microwave. Schedule 2 minutes at maximum power. Remove the micro and put them to dry upside down on a clean cloth. The caps will have to sterilize them following the traditional method (is put them in a saucepan with boiling water for 20 minutes). Book

6 Remove the vanilla pods form the and put one in each sterilized jam jar. Fill the jars with pumpkin with vanilla jam and close well. Let them cool upside down to vacuum. Let cool completely before setting them in the fridge