Rice paella with red prawns and vegetables. The winning paella

Today we travel about. I do not usually go or to Zahara or Sanlucar in August... simply impossible. I enjoy much more by visiting them in may, June or July as Max (even when I lived in Madrid as well). Increasingly less like crowds, it will be that I'm doing more... as I said a friend. For years that it did not return to Sanlúcar, at least fifteen (was not converted Street Wide and Ibense It was the most), but I recognize that since that year, by the 1990s, I spent more in Spain than in Malaga, Sanlúcar caught me. We went this past July, and I was amazed at the amount of people that swirled in the crowded Plaza del Cabildo in the evening, Center nerve... that is it of this in August? and my friends (also excellent hosts) answered: we we're going out, the people... All said. Fancy a ride?

To Sanlucar de Barrameda I'll not discover, already my dear makes it regularly Carlos Herrera. We know of its multiple attractions, but for me, as I imagine that you for many others, the greatest of the incentives, is the gastronomic. I can not... love it! In addition to its people, walks, its history, its horizons and its sunsets, I can the secrets offered its wineries of chamomilethe market, and... of course, its restaurants and taverns.

Is that you will not be surprised of nothing but insurance you will like. The last visit was with people there and that makes it special... After a good portion of Churroshave a good time in the morning in her small and old market It is a great experience: their famous prawns (up to the size motorola, says Javier, because when they open as the old phone, they arrive from the ear to the mouth), crayfish, red prawns, galleys, tuna, hake, sea bass, and a long etcetera. Not hesitated an only instant provisioning me for the next few months, so I got with a thermal containers, ice and there which, according to the indications of my friends, I filled it up to above (did not give for more).

Of the many places where to go and where I was many years ago, we repeat in the classic Barbiana, in calle Ancha, now multiplied with new premises from all corners of the cabildo. For me, in addition to the prawnsthe AlInAs potatoes they are second to none (and Capel will tell us in its ranking). Following in the with the old firm of drinks of the wineries the Gypsynow converted into a restaurant bar, corner with Balbino and Chamomile's own winery. That pleasure is to take there, manzanilla in Sanlúcar.

But leave for another occasion House Balbinus and his incredible shrimp omelettes. All could not be, and look at that years ago I was impressed their endless list of dishes... brutal!

And no, where you get in Under guidance... we throw away the already known Moustache House and my dear Pomawhere even I keep in mind the medallions of squid filling and the rice, and we are led by Javi recommendations to Paco Secundinus. There already finish off, an impressive nest of meagre of which are remembered and a spectacular, and very tight Rice's price for the place in which we are. A recommendation, tarry in low guide with a drink overlooking the mouth of the Guadalquivir and Doñana for the desktop. Children enjoy, have space and if the afternoon over, you better. The day will be worth.

Chamomile we'll talk another day... but let me a final recommendation. Some wineries, such as La Gitana, enabled between the buildings where deposited barrels, terraces for a drink in a relaxed way, in this case, The Patio The Gypsy. They are appealing, full of green and freshness, with solera and ancient. Indulge yourself in that environment magicyou will like it.

Back to the recipe: of those acquisitions in the market, I reserved the red shrimp to give a simple and spectacular paella rice aroma, taste and power: rice paella with red prawns and vegetables, which I took to send to the contest of Canal kitchen and Aneto wines... I will tell you. Hands to the kitchen!

Total for the paella with the broth mixed Aneto: €26.32. For Diner, €8,77. An elegant, sumptuous and strong flavored rice

As the occasion calls for it, and the Red prawns acquired them in the market of Sanlúcar de Barrameda, I recommend a Chamomile native to all life, from Bodegas Caydsa (former cooperative), perfect to accompany fish and seafood: Chamomile Bajo de Guía. Don't forget to take it very cold. Its market price is €6.50

2 we are going to proceed to flavor the soup with sofrito. In a saucepan over medium-high heat, we put the content of the stock, three heads of prawns with their coral, shells, nora seedless, half of the paprika and saffron half. Keep them to fire medium strong 10 minutes, no more, this is sufficient for has been flavoured broth. You apartáis it fire. strain to remove the shells and reserve it for later.

3 we begin with the paella. Add the olive oil the bottom of the pan with garlic and we light the fire of the barbecue to medium-low. In my case, I have a pan of conventional gas from two fires, only I turn on the small center ring so that I Cook in the middle of the paella and I'm removing the perimeter ready-made ingredients. If the Pan that you have only have a ring of gas, can also do it, taking care to remove the ingredients once made. 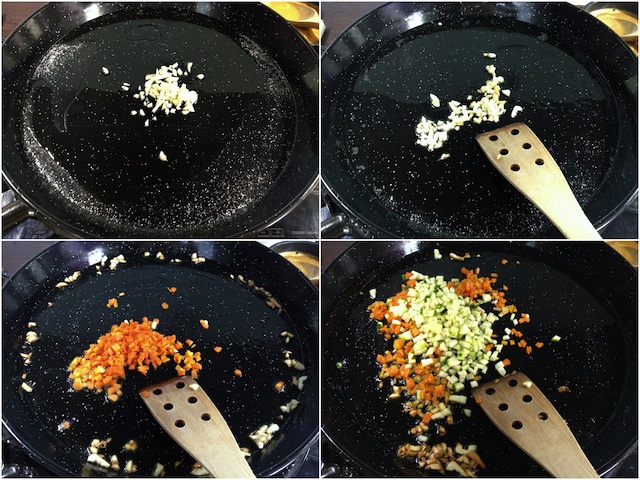 4. once begin to be golden garlic, climbed to fire medium and add the carrot, so is stir-fry a bit, season it and remove them for 3 to 4 minutes.

5. Then add paella center chopped zucchini and they sear for another three or four minutes moving them constantly. Once made, they removed the paella and it reserves.

6. proceed with the red shrimp. We went down to fire low and put three heads with the coral in the center of the paella, crush them to extract the coral and give them back. With two or three minutes we will have had enough. We get heads and remains, leaving only the coral. We got the fire to a minimum. 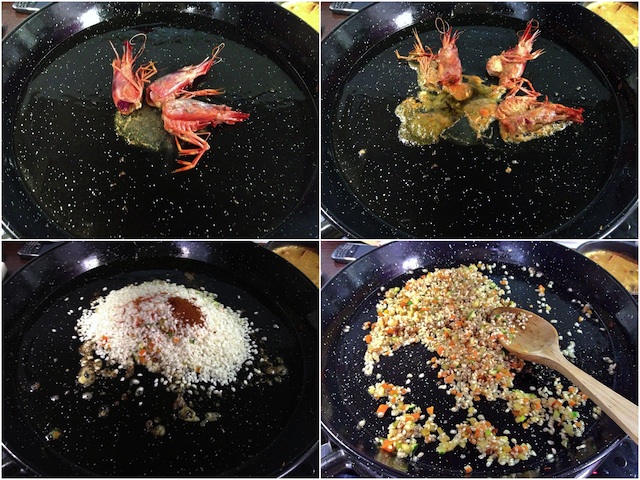 7. it is measured the volume of the 300 Gr. of rice in a cup (for example). In my case, occupy 3 cups (depends on the size of Cup you use). Therefore, I reserve broth with fried, this paella, 9 cups, three times the volume of rice, to finally go to demand watering as go watching the firing of the rice while it is cooking. I put heat on the broth micro (2 min) at maximum power. It is very important that the broth is very hot when we add it to the paella, since otherwise it would break the rice cooking.

8. We incorporate all the rice with a bit of oil, the strands of Saffron and paprika, and for 4/5 minutes stir constantly over medium heat. Browning it well, we got a little "Brown" rice, which will help us to give final ease.

9 then turn ring big barbecue (outdoor) over high heat with the center ring. All the full stock are about 9 cups, so that with the hot broth, We first add to paella only 2/3 parts (6 of 9 cups) of the same, alike and mix together with other ingredients. The full stock triples just the volume of rice. We leave the other 3 cups to then demand, we reguemos with more broth to achieve the fluency of rice (will keep you warm and reserved). Stir well with slotted spoon to make it all matched. We tried salt, and add a bit more if necessary, taking into account that the broth of rice must be tasty generously, since it loses some salt in the absorption of liquid that makes the grain. 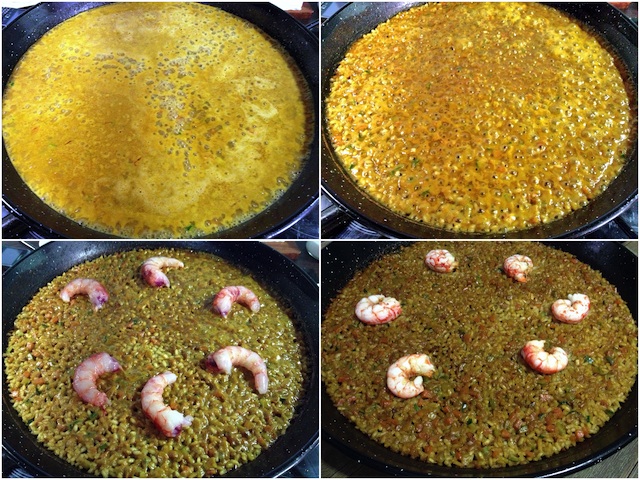 10 and proceed with the rice cooking: We are going to bring to a boil the stock and that the maximum of flavor is in the grain. We let the two fires (the outer and the inner ring) to the maximum for approx. 10 minutestaking care of the fire spread by all the paella evenly. Stay tuned because the broth boil and will appear many pompitas across the surface. We are watering with 3 extra cups last about 5-7 minutes where we see that you becoming failure so that the rice is not without broth anywhere (keep in mind that some paellas are concave and in the Center always accumulates more amount of rice being in the perimeter that the layer of an only grain).

11 after the first 10 minutes, We will reduce the fire below, and will thus keep it approximately 7 min. The end will coincide when it is very little broth into paella, and at this time will have evaporated virtually everything. The firing of the grain, we tested if it is tender on the outside and somewhat whole inside, is the time. If not, water a tad more to the driest areas distributing it equally. This makes a little stock still in the paella dish by evaporation to the next step.

12 will proceed to Cover the paella with aluminum foil (turn it into a furnace), but before, put the peeled shrimp in paella. So when the grain is ready (whole inside and tender on the outside), and fire gets back to high a couple of minutes to make the evaporation effect. The couple of minutes shuts off the fire, and let the aluminum foil, which rice to rest for at least 5/7 minutes and finish cooking. The prawns will be perfectly only with this heat.

13 and... ready!. We ended up with a very powerful rice flavored red prawn paella with vegetables with a thin layer of rice. Once rested, the rice is ready to be served... If you wish, removed the paella completely before serving, and the rice in the dish will get homogeneous texture, since never become equally grains from the Center to the perimeter. Bon Appetit!

You can also subscribe to receive updates in your mail, do it HERE.

By the way, do you dare and you come to the new Indian Cooking Course we will do in the Obrador Dulce y Salado Cati Schiff in Fuengirola the on September 12?. You have all the info here:

Black rice with leeks and prawns