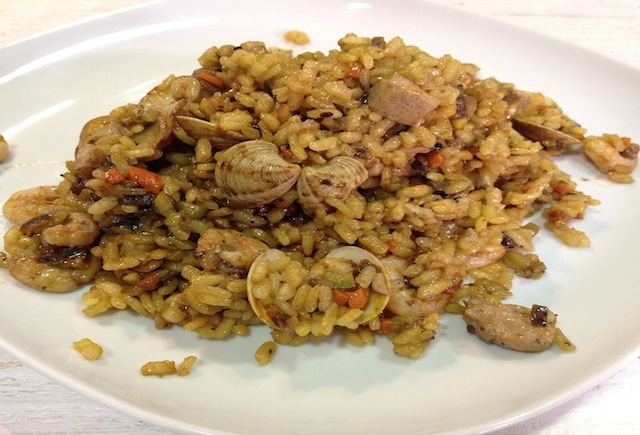 "To start a big project, does lack courage. To complete a large project, it does lack perseverance" 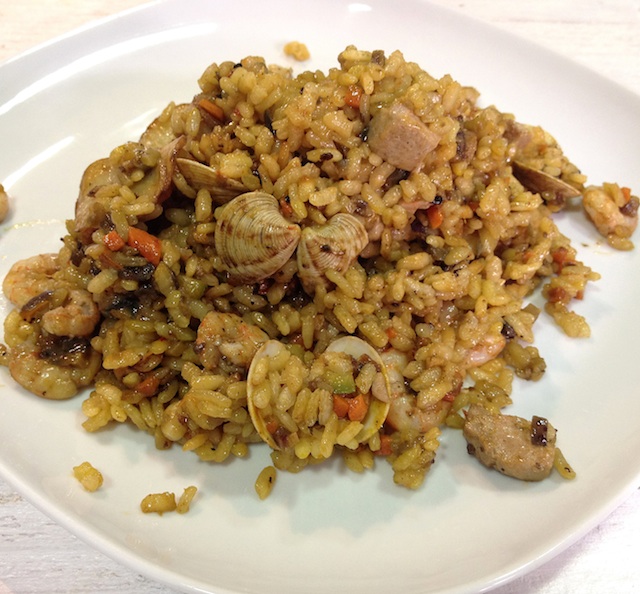 Have you ever tried to go to Market or to Square to buy paella ingredients? To my love to take advantage of Saturday morning to visit and choose products to rice. This time I chose the related ingredients of the fish market and the fresh tuna, but I acknowledge that apart from its delicacies, markets interest me much more as places of interest for your coloryour lifeyour hustle and extravangancia. I think that visiting one of them you get to the idea of the site and the inhabitants of the place. 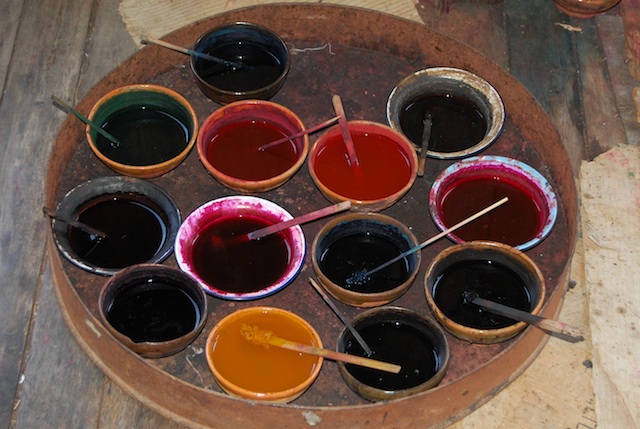 One that most caught my attention was that of Inle Lake, in Burmaof which I have already spoken on occasion. You remember the? post?… In the you can make you an idea more than enough charm that has. The market is held daily travelling form the perimeter of the Lake (that way it caters to all inhabitants). Even barter between the tribes of the mountains and the residents is given in the Lake. 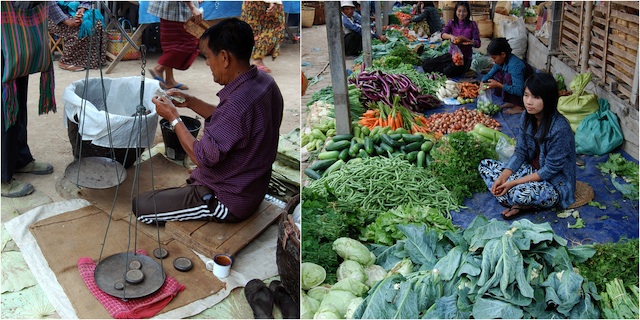 The colorful and willingness is special, part floating, part in land. Food, merchandise and other goods are swirling in jobs through orthogonal halls where they are grouped the different types of goods being distributed by groups. 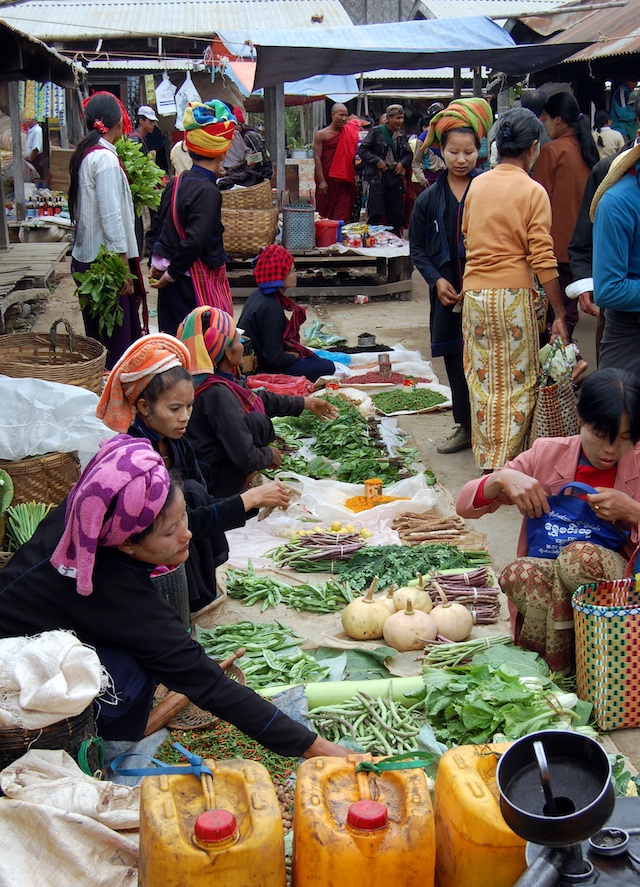 For Westerners, it is not very hygienic to say, since almost all foods are exposed on the floor and without any control, although the color and presentation sharpens the camera. They should even use lists as currency converters on paper due to the low proliferation of tourists in the market. 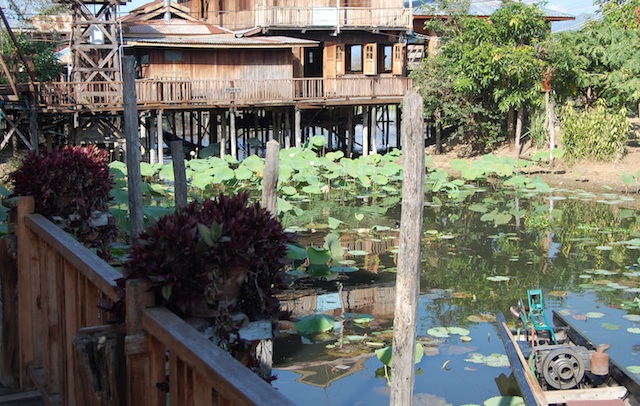 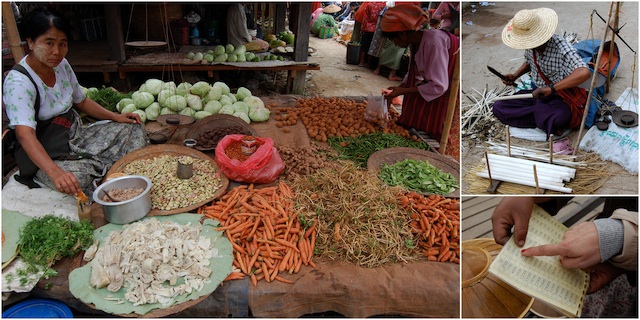 The fish market, the market, and this international form of purchase sale has always attracted me attention. So for this recipe that I presented to the contest of paellas Aneto, I decided to combine some food from the market, with other less seen but equally bold in rice, potato. With this proposal we have been finally selected among the top ten Aneto Paella Contest (which is not bad),... and what has more merit: we are not professionals, we like and cook with Aneto because itself, and not by the contest (did it before), what makes us distinguish ourselves and feel even more satisfied. I attached here all my paella recipesI have many, choose the one you like and... enjoy!

Do you dare with a traditional fresh and at the same time innovative paella?. Come on, try to visit the markets more often, bring you the purchase home and for this weekend... to the kitchen! 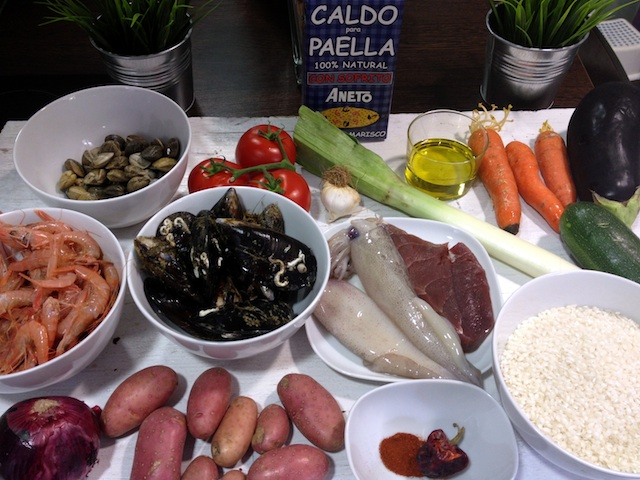 Total for the paella with the broth mixed Aneto: €28.00. Per person, € 7,00. A different, powerful flavor and impeccable rice

Note: I prepared paella for more people, so we have provided the amounts

I recommend a fresh, rich and white wine: Viña Sol, Parellada grapes belonging to the Bodegas Torres. It has a very nice fruity aroma signature. Its market price is €4.50

2 we are going to proceed to boil the mussels. Put a couple of fingers of water and three Bay leaves in a saucepan, keep them to fire medium strong, covered until you go opening (no more than five minutes), you apartáis the fire and let it cool. You take away her shell and you book them for the end of the paella.

3 start cooking: cut the garlic sliced, as always, taking care to clean off the strand, or heart (so avoid to repeat) and sprinkled a little salt for all the paella so the bottom does not burn.

4. Add olive oil the bottom of the pan with garlic and we light the fire of the barbecue to medium-low. We nivelamos the paella so that it is not geared towards any side. In my case, I have a pan of conventional gas from two fires, only I turn on the small center ring so that I Cook in the middle of the paella and I'm removing the perimeter ingredients already facts (without removing them from the paella). If the Pan that you have only have a ring of gas, can also do it, taking care to remove the ingredients once made. 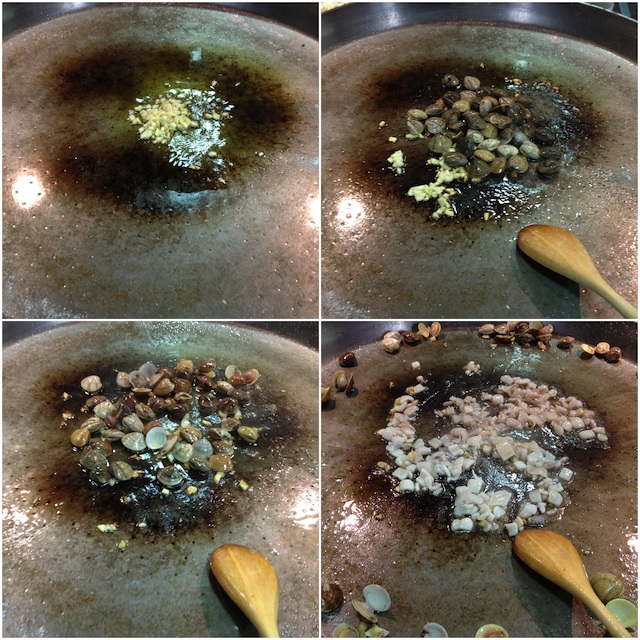 5. once begin to be golden garlic, got the fire to medium-high and add clams clams cleanso they open and fall off the juice in the bottom of the pan. Season them and remove them for 4 or 5 minutes. When the clams are open, we withdrew to the perimeter of the paella so not continue cooking (or directly away until later).

6. Then add paella center sliced ​​squid and they sear for another five minutes moving them constantly. Once made, they are removed to the perimeter. 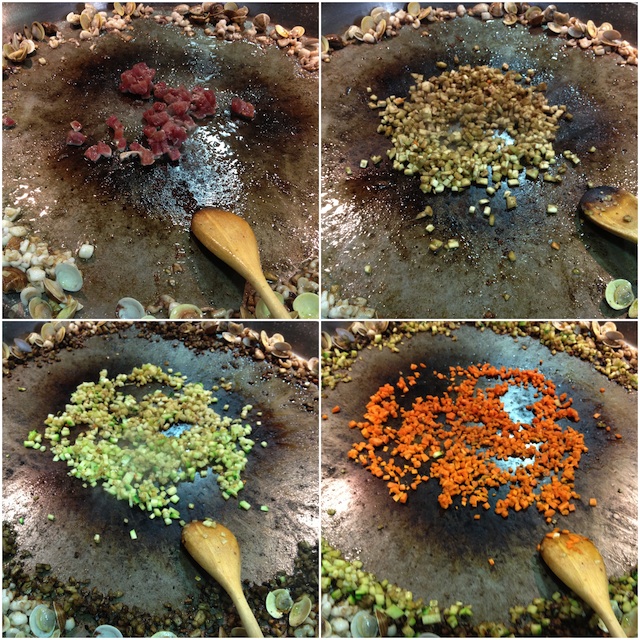 7 proceed with the tuna. We pour it to the paella and in no more than 2 or 3 minutes, stir it and remove it. Keep in mind that the tuna requires very little kitchen, because with seal it and something else, you are ready to add it to the end.

8 start with vegetables, first with the Eggplant and sauteed for about 5 minutes over medium heat with a bit of oil. Once cooked, remove to the perimeter. The same thing we do with zucchiniall very chopped (for 4/5 minutes). As it is Browning, we separated it to the edge. Later the carrot (5 min.), the red onion (3 min.) and finally the Cherie potato laminated with a good background of oil, that when you are on the one hand, we give back and we do it on the other. I guess you have not used the potato in paellas, but I think he sings with the other ingredients chuckles in sheets. Potatoes do not keep them in the paella, but separated them and reserve for the final. 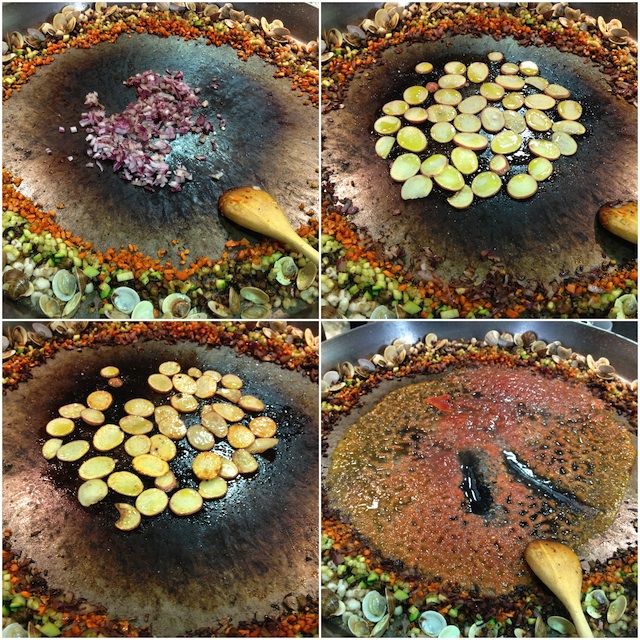 9. Pour the contents of the grated tomato: Heat it for a few minutes over medium heat so you Saute.

10. it is measured the volume of the 400 Gr. of rice in a cup (for example). In my case, occupy 3 cups (depends on the size of Cup you use). Therefore, I reserve broth with fried, this paella, 9 cups, three times the volume of rice, to finally go to demand watering as go watching the firing of the rice while it is cooking. I put heat on the broth micro (2 min) at maximum power with the nora seedless. It is very important that the broth is very hot when we add it to the paella, since otherwise it would break the rice cooking.

11. We incorporate all the rice with a bit of oil, the strands of Saffron and cumin, and for 4/5 minutes stir constantly over medium heat. Browning it well, we got a little "Brown" rice, which will help us to give final ease.

12 then turn ring big barbecue (outdoor) over high heat and also climbed the center ring. All the full stock are about 9 cups, so that with the hot broth, We first add to paella only 2/3 parts (6 of 9 cups) of the same, alike and mix together with other ingredients. The full stock triples just the volume of rice. We leave the other 3 cups to then demand, we reguemos with more broth to achieve the fluency of rice (will keep you warm and reserved). Stir well with slotted spoon to make it all matched. We tried salt, and add a bit more if necessary, taking into account that the broth of rice must be tasty generously, since it loses some salt in the absorption of liquid that makes the grain. 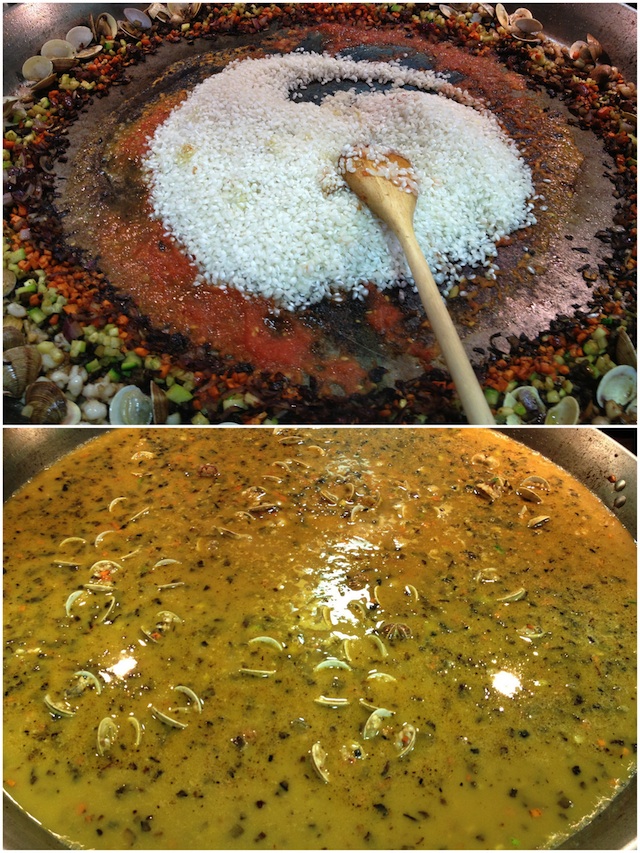 13 and proceed with the rice cooking: We are going to bring to a boil the stock and that the maximum of flavor is in the grain. We let the two fires (the outer and the inner ring) to the maximum for approx. 10 minutestaking care of the fire spread by all the paella evenly. Stay tuned because the broth boil and will appear many pompitas across the surface. We are watering with 3 extra cups last about 5-7 minutes where we see that you becoming failure so that the rice is not without broth anywhere (keep in mind that the paella with concave and the Center always accumulates more amount of rice which the perimeter that the layer is of an only grain).

14 after the first 10 minutes, We will reduce the fire below, and will thus keep it approximately 7 min. The end will coincide when it is very little broth into paella, and at this time will have evaporated virtually everything. The firing of the grain, we tested if it is tender on the outside and somewhat whole inside, is the time. If not, water a tad more to the driest areas distributing it equally. This makes a little stock still in the paella dish by evaporation to the next step.

15 we are going to proceed to Cover the paella with aluminum foil (turn it into a furnace), but before, sprinkled rice ingredients we had booked: tuna, potatoes, loe mussels and also the peeled shrimp. So when the grain is ready (whole inside and tender on the outside), and gets the fire back to high a couple of minutes for evaporation, to take effect. The couple of minutes shuts off the fire, and let the aluminum foil, which rice to rest for at least 5/7 minutes and finish cooking. The prawns will be perfectly only with this heat.

16 stir paella completely before serving, and the rice in the dish will get homogeneous texture, since never become equally grains from the Center to the perimeter. 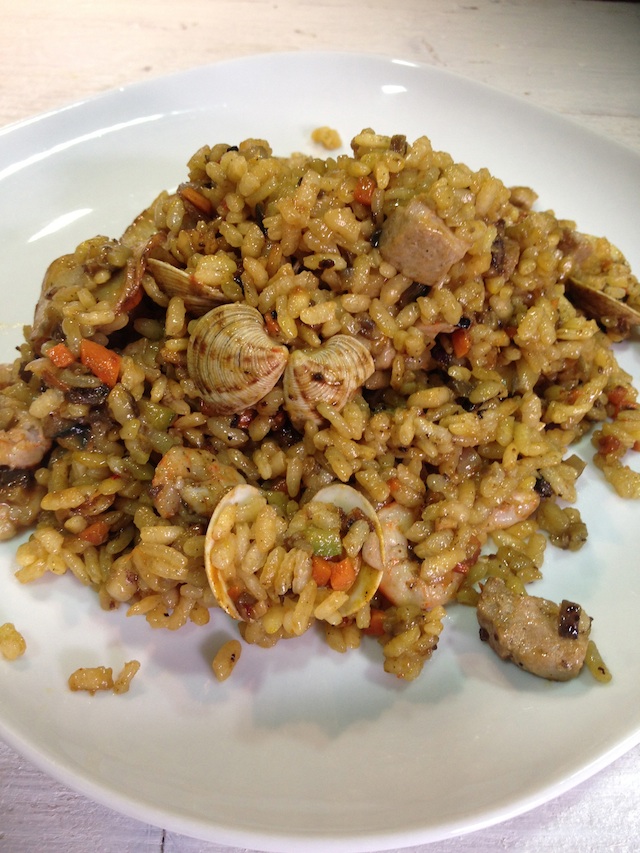 17 and... have!. We ended up with a super tasty rice in a large paella to make thin layer of rice. Once rested, the rice is ready to be served... Bon Appetit!

I leave the video of the step of the preparation of paella and technical data: 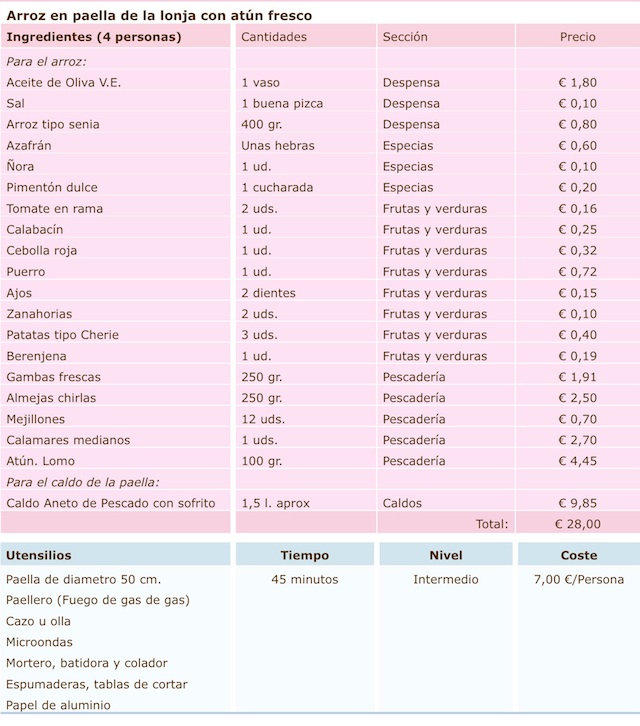 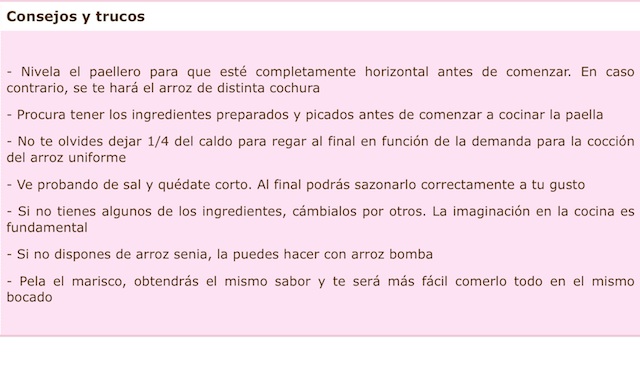