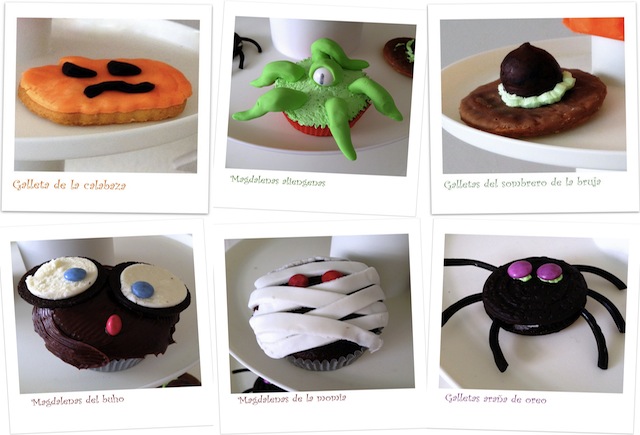 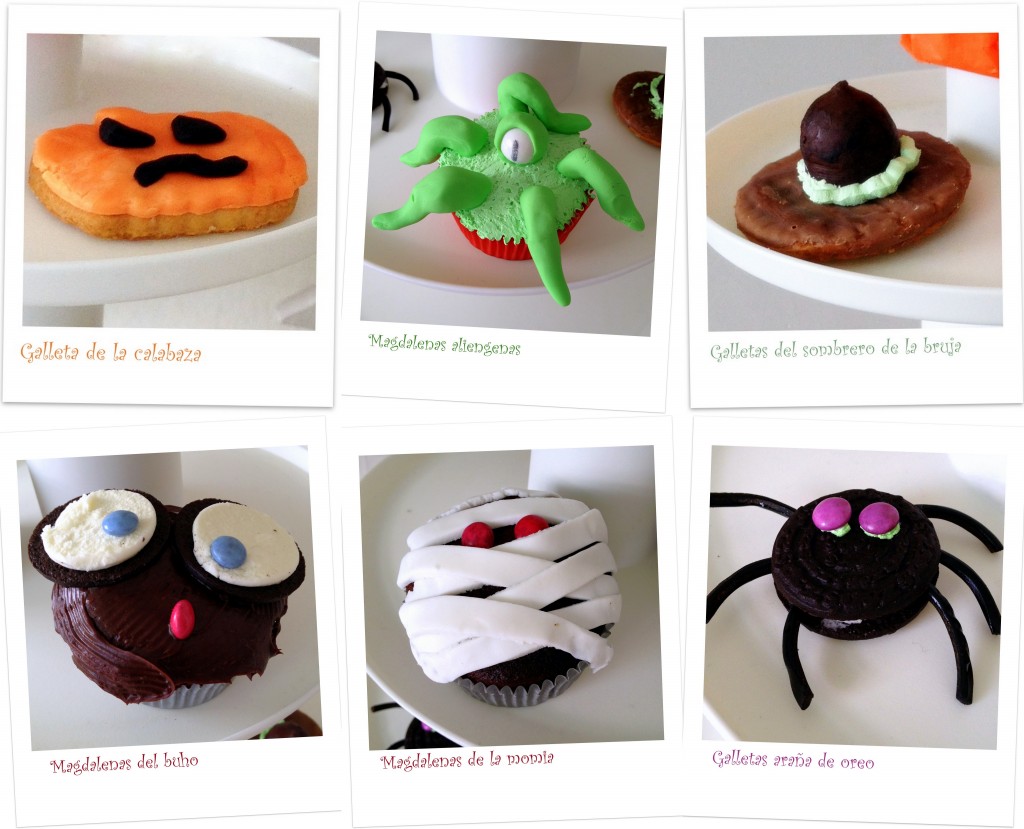 Today's post contains no no magic recipe... or Yes?, or no dream place or also?. Today's post speaks of the magic kindergarten, the magic of the costumes and the children... but I assure you that you are going to hallucinate: today... six terrifying children's recipes! and not so children. If you like to cook together with your children, do not fail to regard all these recipes also with children. Does anyone give more?

We started doing some simple Cookie Witch Hats. For them we used chocolate digestives, truffles biscuits from chocolate and a bit of cream colored. There goes the first recipe: 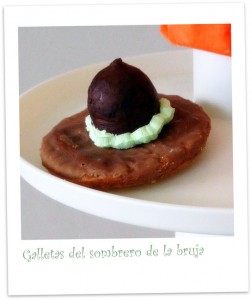 2. with a small sleeve pastry (served frozen small bags with a small hole made with a cut in the corner), the children made a small loop around the truffle simulating's own hat. The result, as can see it, very colorful.

We continued with Alien Cupcakes (Yes, Yes, alien and all...). We use a few cupcakes vanilla that I prepared earlier and cover them with cream colored green. The second recipe, including Vanilla cupcake:

2. put the flour, the sugar in a large bowl. The yeast, salt and soft butter. First mix with a fork and then with help of the mixer at low speed until it looks like sand.

3. mix half of the milk and beat until everything is well beaten. Add the egg and the rest of the milk and mix with a fork first (care because if you mezcláis with the Blender it will splatter all) and then with mixer until well blended.

4. with the help of a spoon, put the mixture into molds for cupcakes. It should not be filling the moulds up to above. It must fill only 2/3 of the mould, i.e. that it is a free finger.

5. bake for 15 minutes until click Cupcakes with a knife, the tip comes out clean and do not become mass remains stuck.

6. to decorate, once cold cupcakes, we use cream (cream) with green food coloring. Assemble the cream and dye it. With the help of a manga pastry (earlier it may be) covered cupcake, and with the help of a knife (for plastic for children) tupimos the entire surface well.

7 we modeled a little green fondant is that the alien form. First, to make the eye, we get a white gum ball that we covered in part with green fondant and painted it with a black edible color marker the pupil of the eye. Then, we modeled the four or five legs and really around the Cupcake with the help of a few toothpicks.

It was great because the children learned to whipping cream and coloring it, working with fondant and laugh a lot!. 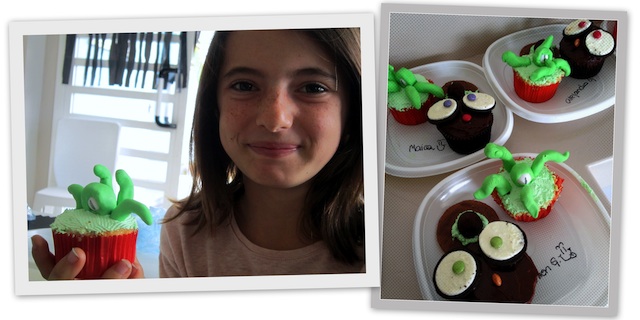 Then we did some Owl Cupcakesa very typical halloween animal. For this purpose we use some delicious cupcakes of chocolate we cover with chocolate frosting. The third recipe: 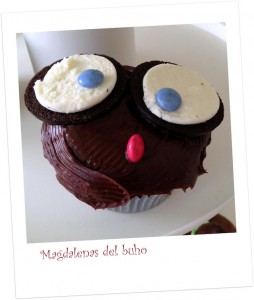 2. put the flour, cocoa, sugar in a large bowl. The yeast, salt and soft butter. First mix with a fork and then with help of the mixer at low speed until it looks like sand.

3. mix the milk, egg and vanilla in a cup and stir with a spoon.

4 gradually add half cup mixture to the bowl of flour and mix with mixer at low speed so you don't splash. Beat until everything is well beaten.

5. then add the rest of the Cup mixture and beat well until everything is just a cream.

6. with the help of a spoon, put the mixture into molds for cupcakes. It should not be filling the moulds up to above. It must fill only 2/3 of the mould, i.e. that it is a free finger.

7. bake for 15 minutes until click Cupcakes with a knife, the tip comes out clean and do not become mass remains stuck.

8. once cold the cupcakes, we cover them with the chocolate frosting on all sides, and with the help of a knife (for plastic for children), we distributed it equally

9 separate cookies two oreo, discarding the part without the cream (on the other side must be all full white cream). A lacasito of color put part of cream upside down on cupcake and in the center of the white cream to form eyes. Another lacasito gives way to the nose.

The children learned to cover with frosting a cupcake and the texture that must be. She was great fun and the kids ate all that was left of each recipe.

To finish the muffins, made the Cupcake Mum on a chocolate cupcake. The fourth recipe:

The Mummy (of chocolate cupcakes cupcakes) 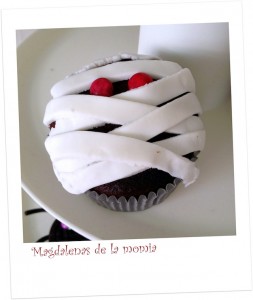 With cupcakes we proceed as we have seen with the OWL Cupcakes.

From step 8 of the OWL Cupcakes, we proceed:

8. with the help of a roll the flattened white fondant. Then cut it into strips and we are putting it on chocolate cupcake as if they were on a head bands. 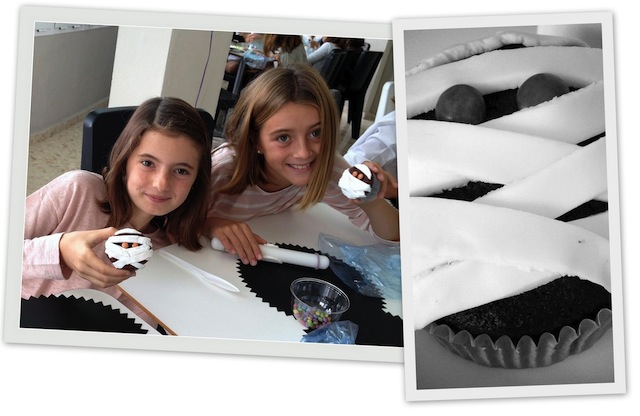 Finished cupcakes, go to the cookies. The kids enjoyed the beautiful creating cookie-eating every day, terrifying critter. First we did a Spider with oreo cookies, simple and spectacular. The fifth recipe:

1. cut the saras into more or less equal length pieces, between 4 and 5 cm. Two threads of sara, are separated so that left only one per leg. Must be 6 or 8 different threads, as you prefer

2 the saras in the part of biscuit cream nailed so set, half on each side

Simple, eh?. Between sweets and chocolate went it big. Each decided how many legs put him to the spider and color would be his eyes. A very funny idea!.

The last cookie we made was that of the pumpkin. The children worked with fondant, learned to stick the fondant cookies and used the rollers. Some for the first time in his life. The sixth and last recipeincluding the cookie: 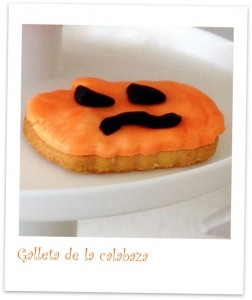 2. put the soft butter, margarine and sugar in a large bowl. First mix with a fork and then with help of the mixer at low speed until creamy.

3. Add the egg, flour, vanilla and salt and mix well.

4. with the mixer to lowest speed we can add the flour little by little with a spoon.

5. remove the mixture from the blender and make a ball. Wrap the ball in plastic foil and put it in the fridge for half an hour.

6. on a table put some sugar glace and a little flour and over the ball. With help of a rolling pin, roll out the dough until you have the thickness of half a centimetre. It is easier if we do it enytre two sheets of paper for baking because I avoid sticking.

7. cut with a short pasta of cookies. Put a baking up a baking paper. Back to put in the fridge for 15 minutes.

8. place the cookies on the baking tray and bake for 10-12 minutes.

11 now flatten the black fondant and cut out the eyes and mouth, terrifying, or modeled her hand.

10. to glue the fondant cookies take a brush and dip it in clear vanilla extract, or in a little water with icing sugar or orange blossom water. Paint the fondant and stick to the cookie.

12. with the eyes and mouth, proceed in the same way.

They enjoyed much giving body to their small gourds of vanilla. The cookies came out great and were delicious!... scary!.! As you can see, these recipes are obvious signs that the muffins and cookies are not at odds with the cooking naturally. Halloween decoration gives you fun and magical touch. 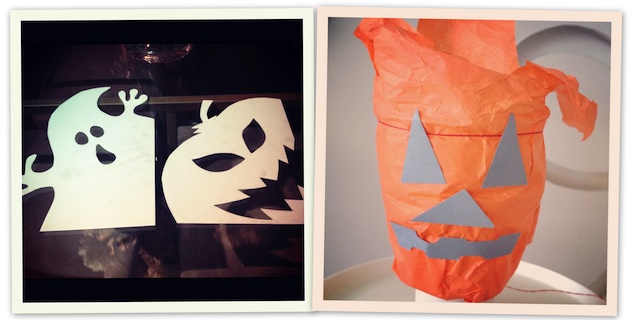 Then we make a terrifying Crafts for House. First they did some ghosts and pumpkins for windows. With white cardboard and scissors and his hands!.

Finally we did lights, or candle cups pumpkin. We lined a plastic cup with help of silk paper orange color. With grey cardboard cut eyes and mouth that we stick with agarbatti. Then a small candle inside jar, and a thread out... We managed to make a lit pumpkin. What a way to transform a plastic cup in a simple and easy way!... and very colorful at the same time. Children thought with the effect of the lighted candle and promised to turn home the candles the night of Halloween, that Yes, provided they are accompanied by an adult.

Finally, when it comes to appetizers (we were 3 hours) were eating a delicious worm sandwichmade with hot dogs dipped in ketchup. The sausages are cut lengthwise into four pieces each so that they leave long, finite strips of sausage. Put into the MIC directly, and by magic, it seems that they come alive and be rizan. They bathe in ketchup and bread. They looked like real worms! 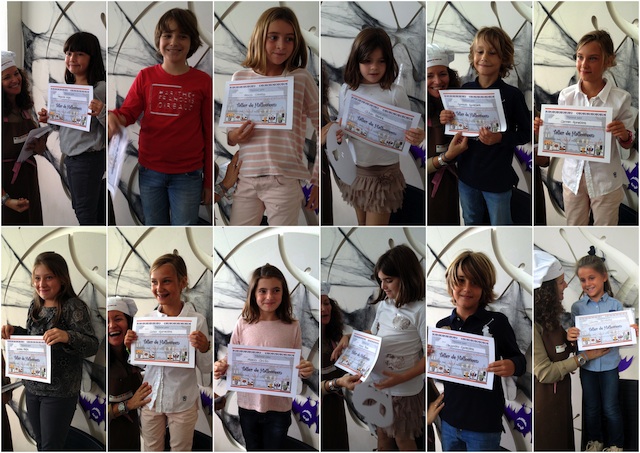 Finale with diploma and happier than some castanets. Everyone enjoyed and had great. They were asking for another course soon. Now mismito plan one Christmas, but first the of greatest pastry: 23 and 24 November in cuckoo with very colorful cakes. I hope you apuntéis and enjoy equal to children did. Run because places are limited!

Enjoy Halloween recipes with your children, they will thank you for it. Kisses