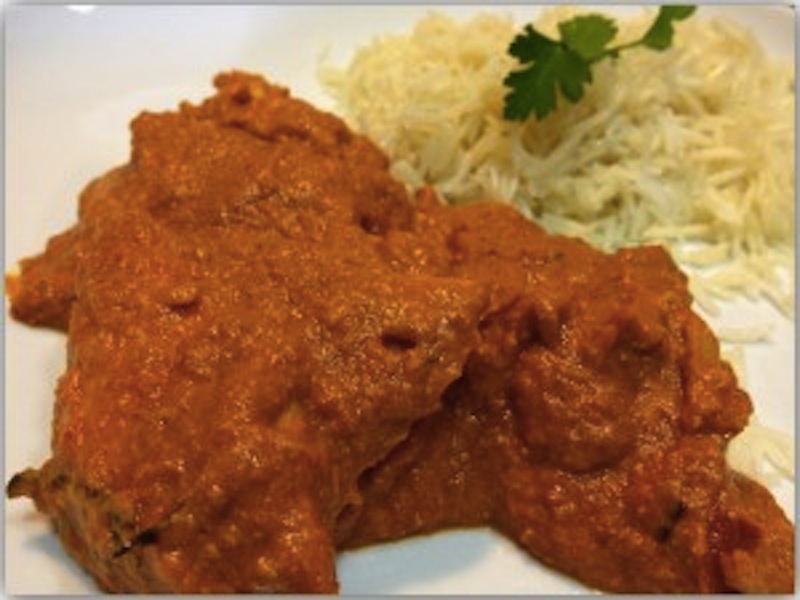 "If you had to choose a comic book character that represent your life what?" 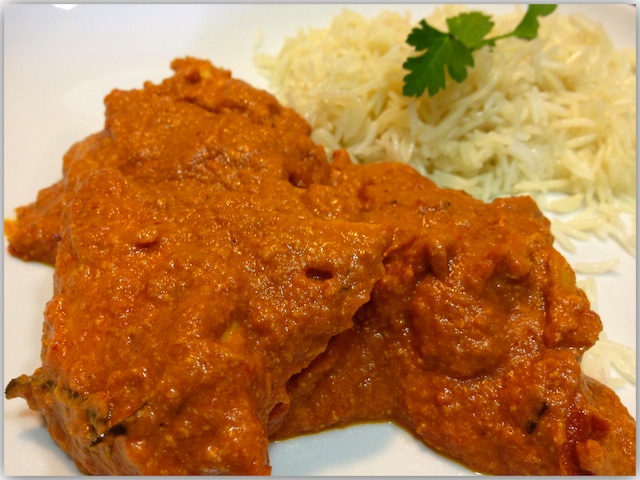 The food of India It is one of the most popular Asian cuisines. Not as much as the Chinese cuisine, but increasingly there are more Indian restaurants by Spain. In countries like the United Kingdom, you can eat authentic Indian cuisine because of the historical connection that the two countries have always had. Those who have tested there, my favorite restaurant is the Chutney Mary Chelsea, in London)www.chutneymary.com) for its atmosphere, service and above all its delicious food. In Spain also a delicious Indian meal, you can eat though sometimes it is not so authentic since they usually take spicy that is an essential part of this cuisine. I like it Tandoori Stationdecorated like the interior of an Indian train. It is at the end of Ortega y Gasset (Madrid). 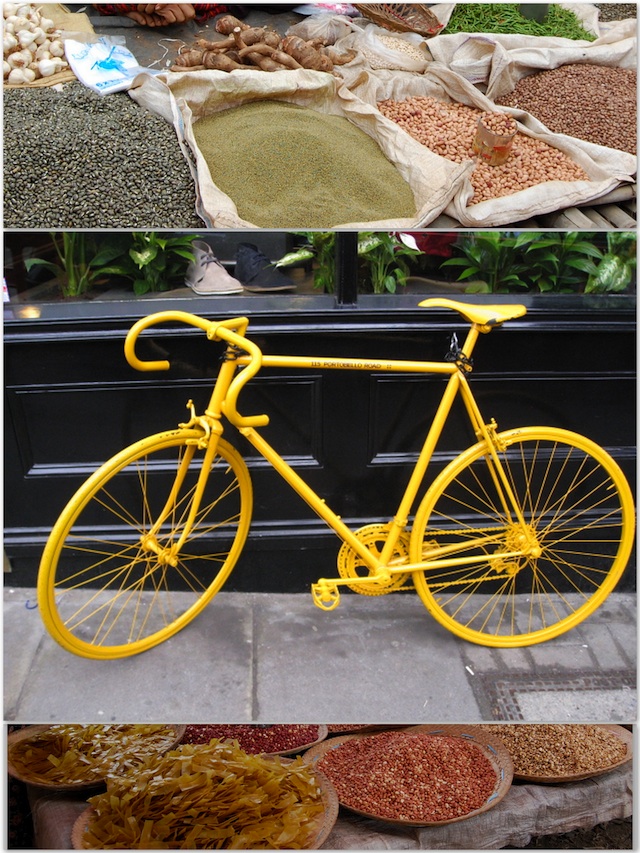 The chicken TIKKA Masala It is a dish of chicken tikka masala sauce. The chicken tikka is a boneless chicken which is marina in spices and yogurt and then cooking in a tandoor (hindu oven) or used to make style masalathat is what we are going to prepare today, recipe taken from the magnificent book "I love curry" of Anjum Anand. For the masala sauce there is a standard recipe, but most of the variants contain milk coconut or tomato sauce and cream, as well as different spices. In this case we will do it with tomato sauce. Although it apparently has many ingredients (especially for spices), try it, because according to the recipe which I give step by step, you will be a rich, exotic and different dish.

The tikka masala is one of the most popular dishes in the world from southwest Asia and indeed the more popular in England, where some say that it is "the true national dish of Great Britain". 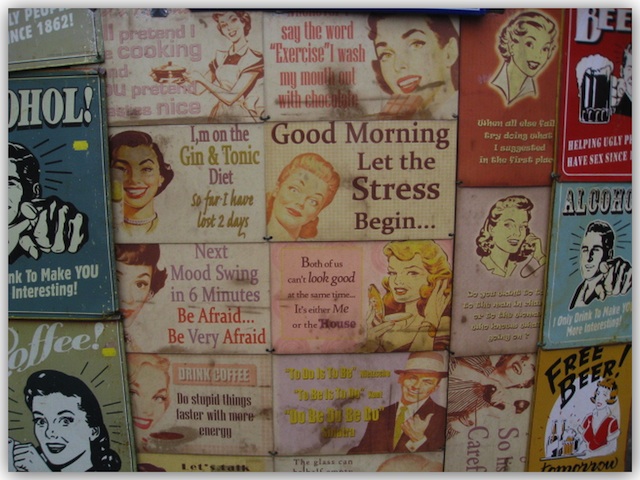 It is generally believed to you have originated in chickens cooked by chefs from Bangladesh in the United Kingdom, although there are several theories about the origin of this dish: for some it was a way to recycle leftovers of the day before (as well as kebabs); others believe that it comes from British India and the need to adapt the food from the Indian subcontinent to the British palate. Others say that the chicken tikka masala It is originally from the Punjab region since there is a very similarly prepared dish containing tomato sauce, chicken Murgh Makhni. 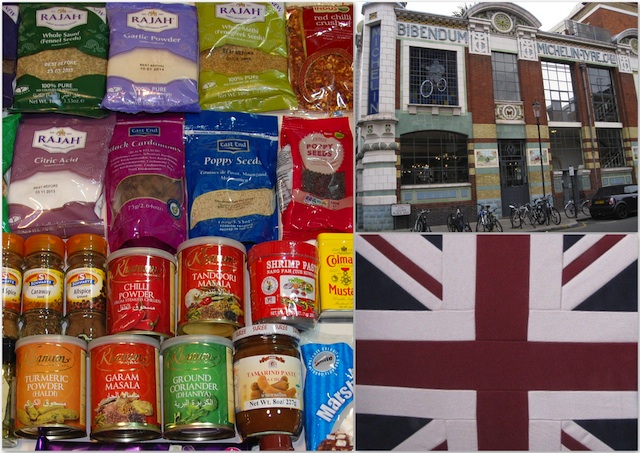 The truth is that a large part of Hindus who immigrated to Britain came from the Punjab region, and that immigrants from Bangladesh are owners of most of the "Indian" restaurants in the United Kingdom so it is more likely that it has been originated by the cooks of Bangladesh in Great Britain. Surely that Sandokan tortilla ate it like us!

Some may be more specific but are not difficult to obtain. Most Chinese stores you can find them and if not, them will find all large surfaces. That Yes, eye with the spices, best understatement does not pass. This recipe has a few amounts so you chop but not for burning. My son ate the chicken delighted; of course, that the like spicy to it. For those who want to buy them (it is not a bad idea considering that these species last a lot fresh and is always better to prepare sauces to taste each one), there is a site on the internet called www.spicescave.com where can you buy all that you don't find in supermarkets.

I bought them in a Chinese supermarket on the outskirts of London. Go is an adventure that will tell you in a next post. 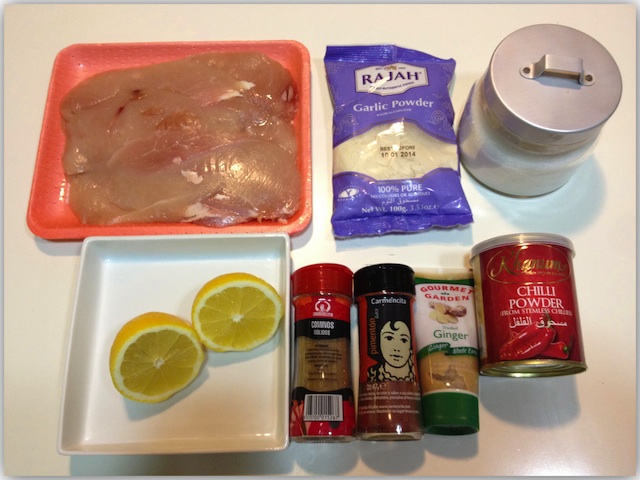 For the marinade Tikka: 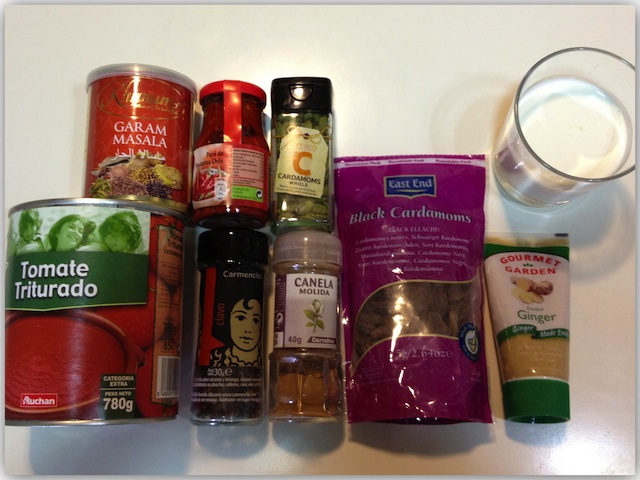 What better going to spicy food is a good cold beer or a light and fruity white wine. As beer I propose the soft Thailand Shinga, but it must be frozen, leaving €1.14 unit. As, I recommend a white wine of the Penedès as Viña Sol. It is a cool white and has an elegant aroma with fruity notes, exalted by spicy nuances. It has pleasant fruity funds and a touch of spice to €4.88. 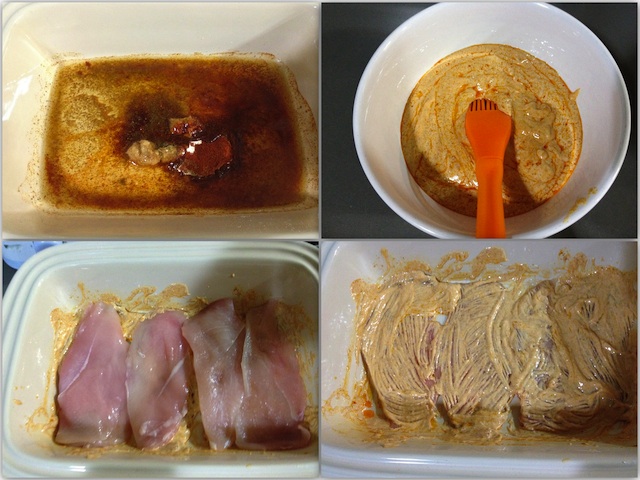 1. mix all the ingredients for the marinade with a teaspoon of salt.

2. with the help of a kitchen brush, go painting each fillet of chicken breast on both sides and place them on a dish. Finish covering with the sauce and allow to marinate as long as possible. Ideally, overnight in the refrigerator covered with plastic wrap. 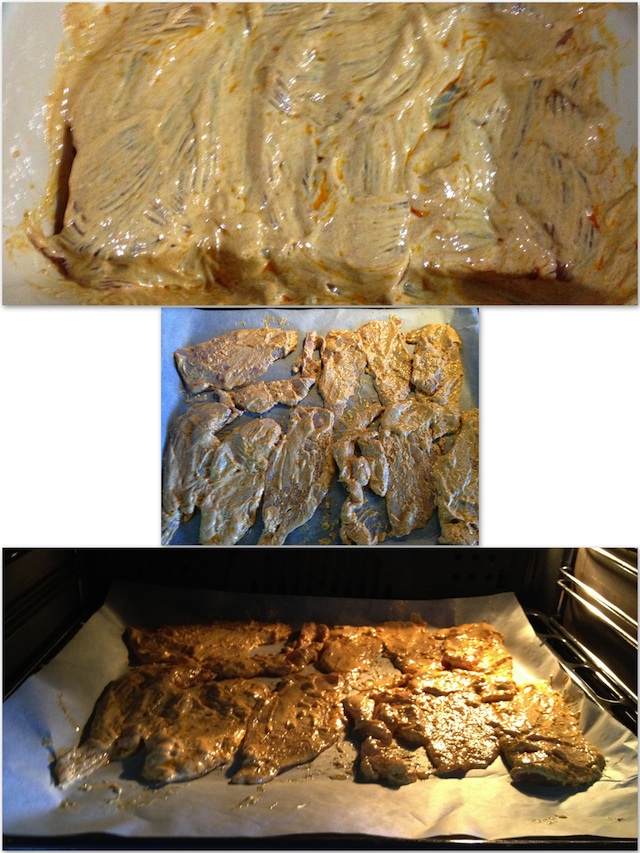 4. remove the chicken from the refrigerator. Put a role of vegetable cuisine on a baking tray, and place the fillets of chicken on it.

5. place the baking sheet in the position above all for 8 minutes or until slightly churruscado (toasted). Remove from the oven. Chicken will ultimately make the sauce. Cut chicken into strips or chunks. 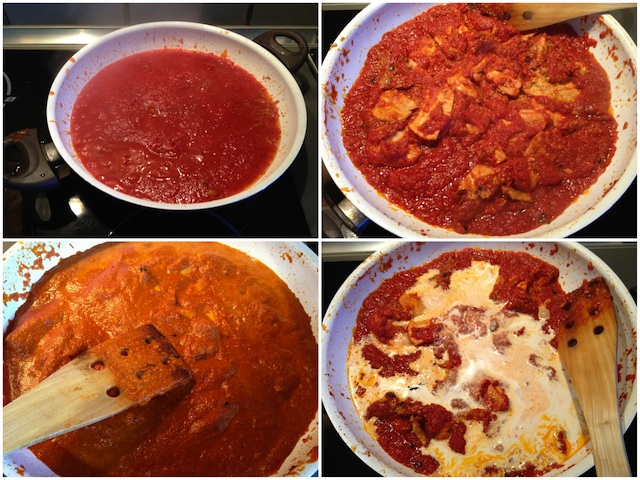 6. grate the ginger and garlic. Mix well and set aside.

7 heat in skillet oil and half of the butter. Mix well. Add all the spices. Once been roasted for about 15 seconds, add the ginger and garlic.

8 Cook until garlic is toasted. Add the tomato puree and tomato concentrate and cook until tomato is well fried (about 20 minutes). Then increase heat to Brown a little tomato FRY for about 7 or 8 minutes or until they have darkened a bit. Add 1/2 glass of water and wait until it boils well. Remove the seeds with a spoon.

9. Add Golden chiles or peppers mashed and the rest of the butter. Let boil for 3 minutes.

10 Add chicken strips and cook for about 3 minutes.

11 Add the cream, sugar, chili powder or chili Cayenne powder and paprika, as much as necessary to get the desired color. leave to cook for a minute. Then add the Garam Masala. Let Cook for another 4 to 5 minutes until the mixture is creamy good.

12 taste the sauce and add salt, sugar or cream according to our taste. Once it is, put the chopped fresh cilantro leaves on top. Serve with boiled rice long. I hope you enjoy it. I assure you that the effort be worth, and your guests will be completely surprised, and especially when you tell him that they will be testing one of the national dishes of... Great Britain. 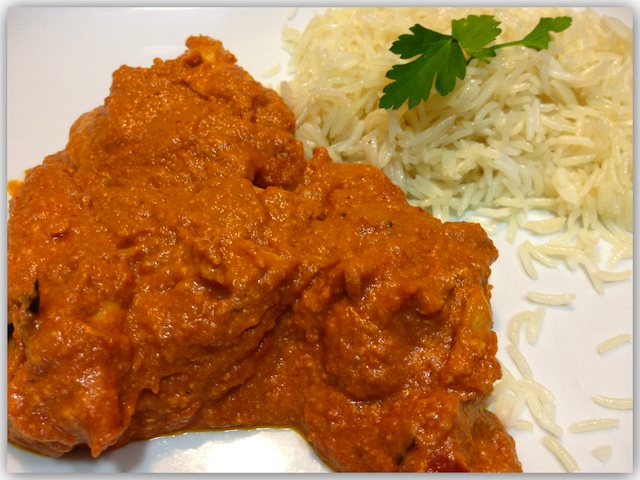