Dry rice in paella with lobster 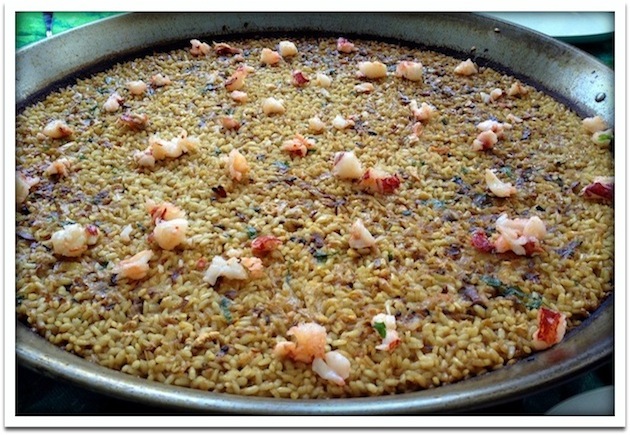 "Perseverance is the best ally for your dreams" 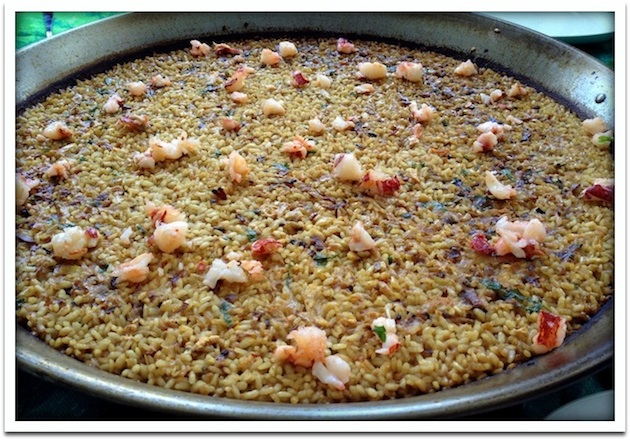 They say the lobster It is a too-precious delicacy as that it ends with a rice... No, not you... The truth is that it is one of the most popular (and expensive) rice that we demand more. It is usual to find it soupy, and to a lesser extent honeyed. Following my faithful tradition to rice in paella thin-film, I dared a dry version. You do not say how came out... It was not good, the following... The best recipe for rice with lobster

Looking for origins of the lobster, zones where and his capture (you know that there are two major types, the) American or Canada - less tasty - and the European(, - tasty and low - that is what we like here), I came amongst other areas, with the North of Europe, which in addition to Spain and Morocco, also caught in its waters. Among them: Norway, Denmark and United Kingdom. Denmark do you know it?

Part of the Scandinavian peninsula, boasts more than five and a half million of inhabitants, and its capital, Copenhagen, in addition to the Mermaid, Tivoli (the original amusement park) or the famed Noma (currently considered the best restaurant in the world), has some places that deserve to be taken into account... do I want to join? 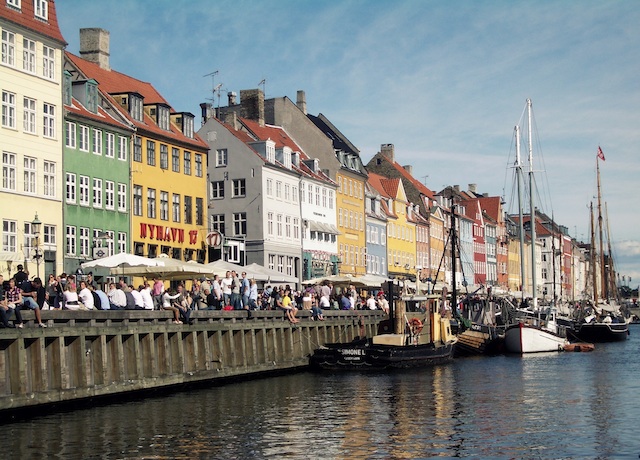 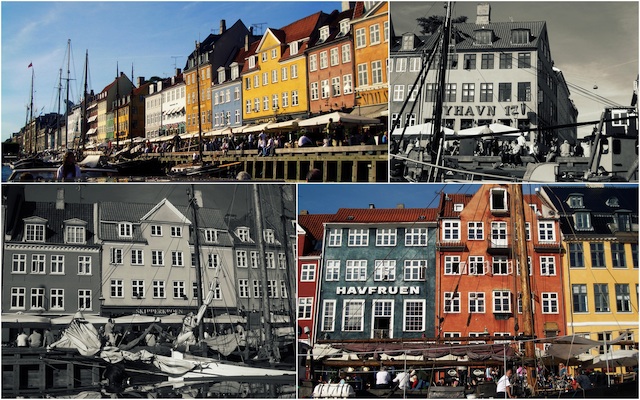 Leaving Nyhavn (probably the most beautiful and photographed corner which keeps the Danish capital), starting of travels by boat, with its colorful facades, time boats and a bucolic and rowdy atmosphere (in one of its house lived Hans Christian Andersen), Copenhagen offers distinct and precious prints through many places that you can spot from their channels. Today... we'll give a ride in boat 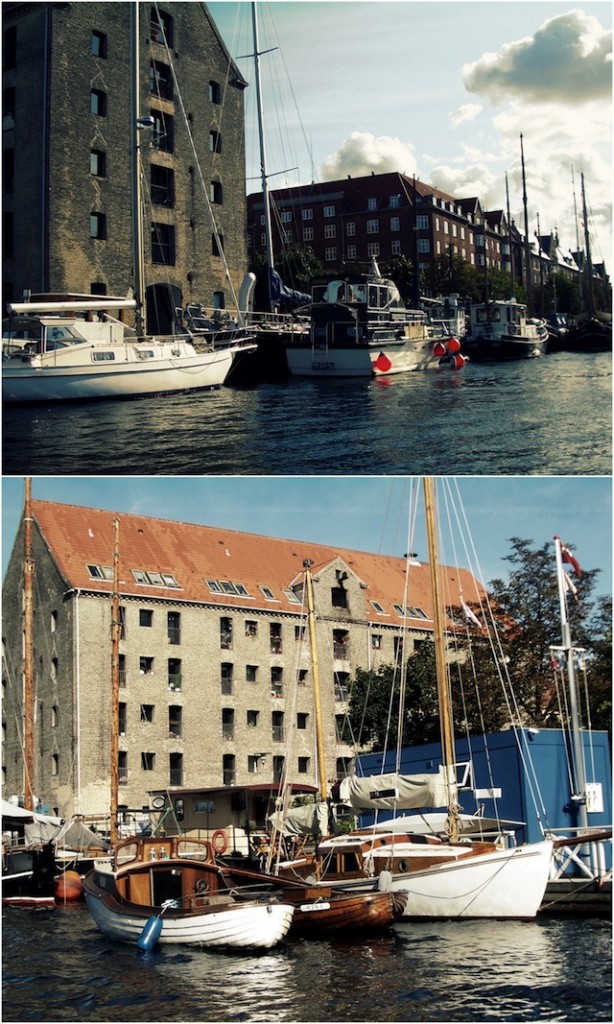 We will reach the access channel to the unique neighborhood Christiania, where the corner is the crowned Noma. There coexist after the boats to modes of floating homes and the rest of the neighborhood 865 people from bohemia and independent way. What began as an experimental adventure just turned forty, with such expectation (in my opinion not deserved) which is second only in the ranking of visits to the famous Little Mermaid. What if I loved it, was the channel where boats are swirling on a permanent basis. An idyllic place. 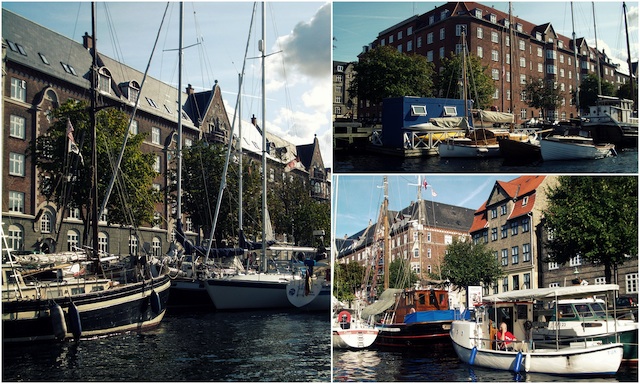 The free neighborhood Christianía It emerged as an independent, hippie neighborhood and semi-legal way in the 1970s. The history began to tear down a fence in the area so the children would have a green area where play. Since then, are considered independent community (not accepted to be in the EU), have their own laws and taxes. They have an absolute permissiveness with marijuana and hallucinogens, sold in the street. 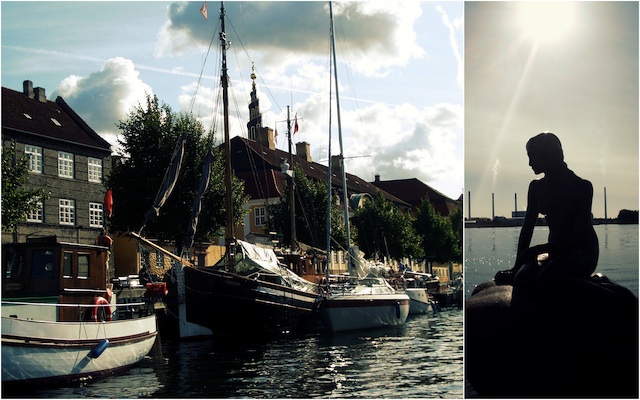 We're back with hunger after the ride huh?. Because we are going to put you remedy. Since we are in the Nordic capital with lobsters, we go to kitchen to prepare this succulent and tasty rice paella with lobster. A nonsense! 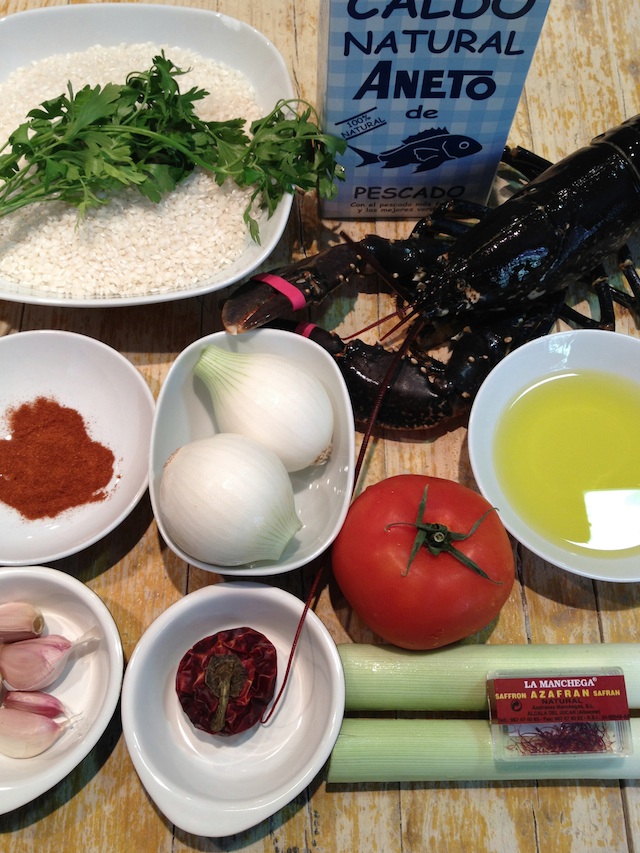 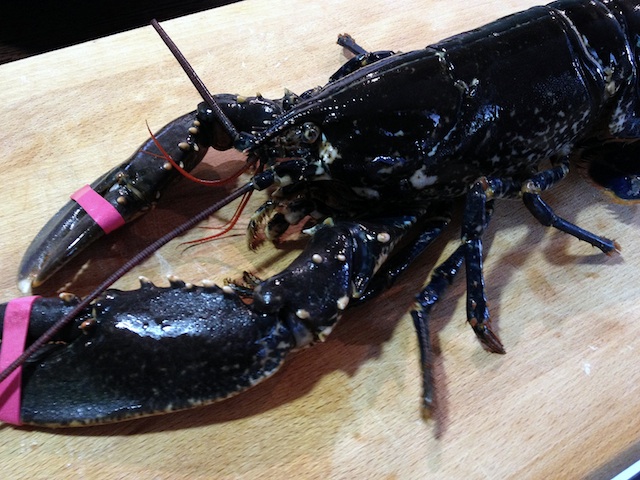 To achieve scent with the lobster and Aneto fish broth (add always very hot to paella): 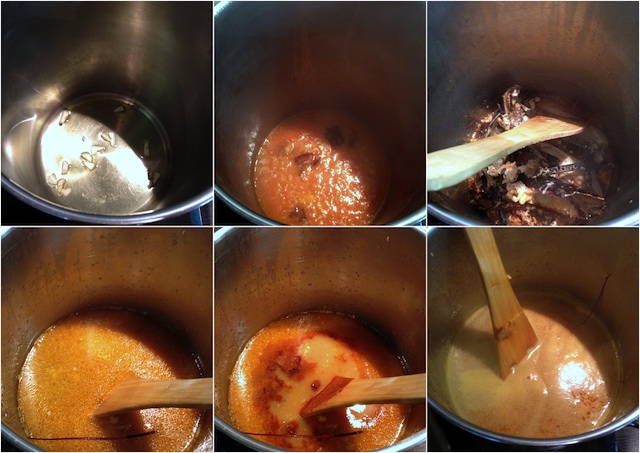 It starts to boil all 20 minutes approximately begun with fire half the bottom with oil, garlic and the pepper seeded. Mix everything and give a few turns. Then add the legs and the lobster heads open so that they fall off their juice. Crush it and stir for a couple of minutes and then add one grated tomatoes, (the other reserve it for the own paella) the toasted saffron and half of the paprika (half a tablespoon). Stir it occasionally for about 15 minutes over medium heat. Finally passed through a sieve and retained only the liquid for the paella broth. You'll get a fumet taste to lobster unanswerable... very got and tasty!
Total for the paella with stock obtained Aneto and lobster: €22.10. Per person €5.53.
Would who you say that you were to take a powerful rice with lobster for that price?

For this paella rice will challenge them to try listed best white wine in the world in may 2012 in Brussels, and we have it close. It is of the Vega de la Reina from Hacienda Zorita (Verdejo 2011) D. o. wheel. Its flavor is more fruity nose that in mouth, driest, resulting a delight. Young. Your price €6,00

2 we started cooking: cut the garlic sliced, as always, taking care to clean off the strand, or heart (so avoid to repeat) and sprinkled a little salt for all the paella so the bottom does not burn.

3. Add olive oil the bottom of the pan with garlic and we light the fire of the barbecue to medium-low. We nivelamos the paella so that it is not geared towards any side. In my case, I have a pan of conventional gas from two fires, only I turn on the small center ring so that I Cook in the middle of the paella and I'm removing the perimeter ingredients already facts (without removing them from the paella). If the Pan that you have only have a ring of gas, can also do it, taking care to remove the ingredients once made. 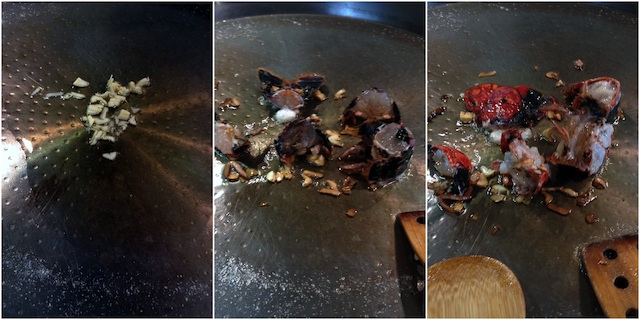 4. once begin to be golden garlic, add the meaty chunks of lobster (the rest: clamps, head, etc remember already add it to the broth). Season it and remove them for 4-5 minutes until you get the reddish color on all sides. It deviates and reserve for later. Once out of the paella, sort the meat from the shell to add it to the end clean and chopped.

5 start with vegetables, first with the spring onion, that sauteed it for about 5 minutes over medium heat with a bit of oil. Once cooked, remove to the perimeter. Do the same with the leek (5 min.) that I also depart. 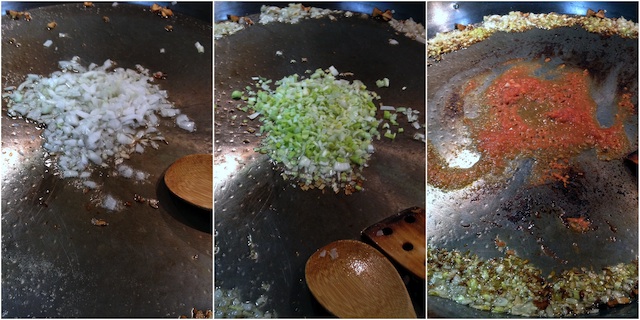 6. Pour the contents of the grated tomato: Heat it for a few minutes over medium heat so you Saute.

7. it is measured the volume of the 400 Gr. of rice in a cup (for example). In my case, occupy 3 cups (depends on the size of Cup you use). Therefore, triple the volume of rice, reserve of fumet, for this paella, 9 cups, to finally go watering demand according to go seeing the firing of the rice while it is cooking. I put the heat on micro fumet (2 min) at maximum power. It is very important that the stock is very hot when we add it to the paella, since otherwise it would break the rice cooking.

8. We incorporate all the rice with a bit of oil, with the rest of the paprika, and for 4/5 minutes stir constantly over medium heat. Browning it well, we got a little "Brown" rice, which will help us to give final ease.

9 then turn ring big barbecue (outdoor) over high heat and also climbed the center ring. All the full stock are about 9 cups, so that with very hot stock, We first add to paella only 2/3 parts (6 of 9 cups) of the same, alike and mix together with other ingredients. Full stock triples just the volume of rice. We leave the other 3 cups to then demand, we reguemos with more broth to achieve the fluency of rice (will keep you warm and reserved). Stir well with slotted spoon to make it all matched. We tried salt, and add a bit more if necessary, taking into account that the broth of rice must be tasty generously, since it loses some salt in the absorption of liquid that makes the grain. 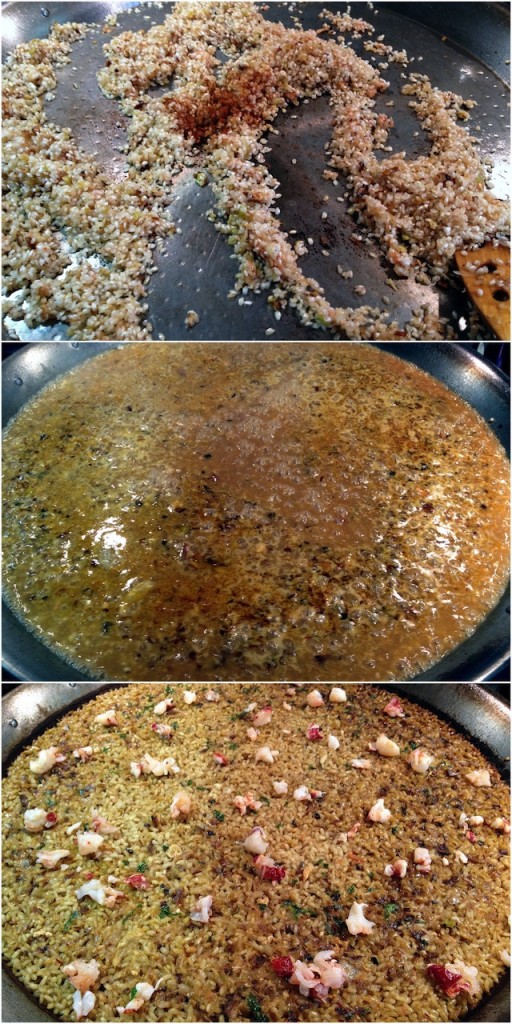 10 and proceed with the rice cooking: We are going to bring to boiling stock and that the maximum of flavor is in the grain. We let the two fires (the outer and the inner ring) to the maximum for approx. 10 minutestaking care of the fire spread by all the paella evenly. Stay tuned because the broth boil and will appear many pompitas across the surface. We are watering with 3 extra cups last about 5-7 minutes where we see that you becoming failure so that the rice is not without broth anywhere (keep in mind that the paella with concave and the Center always accumulates more amount of rice which the perimeter that the layer is of an only grain).

11 after the first 10 minutes, We will reduce the fire to medium low, and will thus keep it approximately 7 min. The end will coincide when it is very little broth into paella, and at this time will have evaporated virtually everything. The firing of the grain, we tested if it is tender on the outside and somewhat whole inside, is the time. If not, water a tad more to the driest areas distributing it equally. This makes a little stock still in the paella dish by evaporation to the next step.

12 we deal pieces of lobster meat equally over the surface of the paella. As already it had cooked before, now only need a mild heat stroke.

13 we will proceed to cover the paella with aluminum foil (we turn it into a furnace). So when the grain is ready (whole inside and tender on the outside), and gets the fire back to high a couple of minutes for evaporation, to take effect. The couple of minutes shuts off the fire, and let the aluminum foil, which rice to rest for at least 5/7 minutes and finish cooking.

14 stir paella completely before serving, and the rice in the dish will get homogeneous texture, since never become equally grains from the Center to the perimeter. We ended up with a very typical caldosa version rice, but I bring in a large paella to make thin layer of rice. Once rested, the rice is ready to be served... Present him with a pinch of parsley to the table! Irresistible! 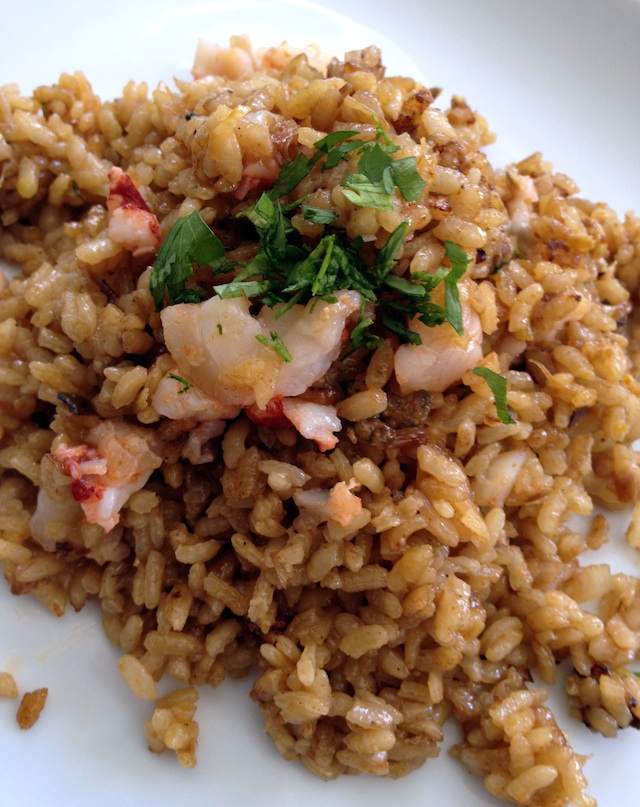 1 keep all ingredients previously prepared, peeled and chopped. Can save you lot of time

2 If you don't have senia rice, but you have pump, fastening a little the amount of stock to incorporate into the paella (leave only 1 liter and quarter aprox.)

3. to make rice in the paella is not sticky, you must be cautious with the times and the amount of broth. When it gets sticky, unless it is intentional, it seems to be poorly finished

4. If you have long, you yourselves can make stock from scratch. I invite you to see the process that how to do it in a way completes this post

5 If you spare you some stock, you not paper it, CRAN it and take it to the next fish paella which you are going to cook. It is a succulent and convincing