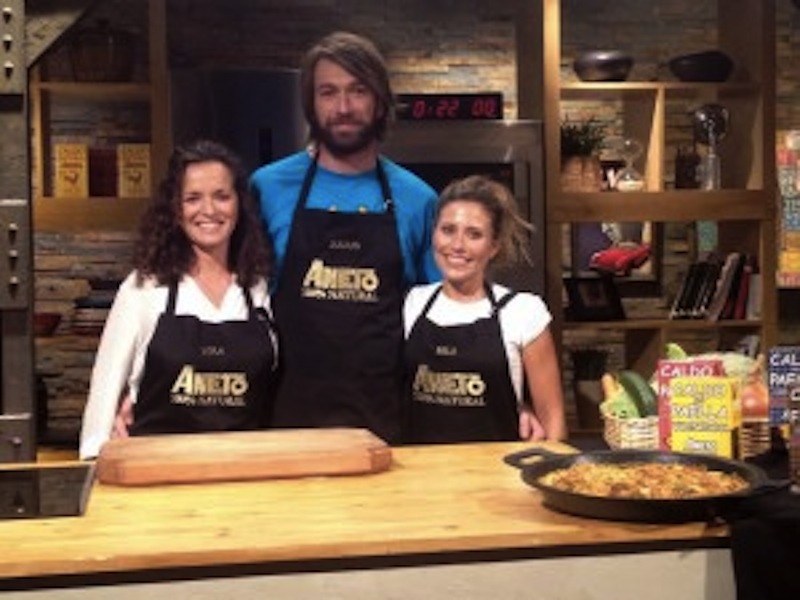 This is a summary of the appearance in the media until today. The truth is that when you think you don't believe it. Hopefully they continue coming and someday... who knows... have a program on TV. Dreams have to have them and pursue them and that am I.

Report on "Network" of Canal Sur

Nice story on the blog and Loleta B Cooking School La Mesa for the program "In network" from Canal Sur, who had the enormous detallazo remember of my. In it, I know a little more and you'll see things that perhaps you didn't know of my blog. A delight was to be able to make it, and the result is charming. Thank you all for making it possible. You can link the image and will be shown the video through Youtube. 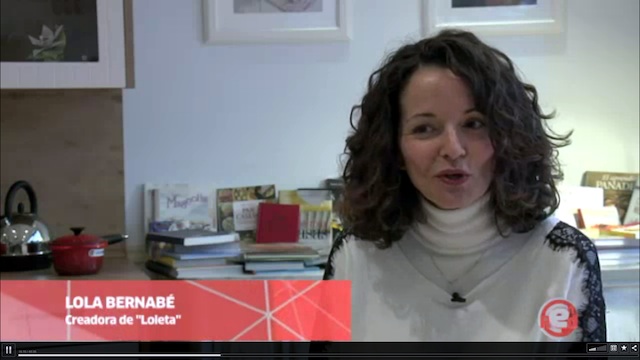 Television program devoted to the preparation of live recipes. On this occasion, I prepared a super mushroom Strudel for a special occasion

Report of the celebration dinner of bloggers Canal Cocina cooks 2013 in the Madrid restaurant Flash Flash on the occasion of the recognition by the award received. Along with the rest of award-winning blogs: Gastroandalusi, Isasaweis, we only sweets, to frying peppers and Mireia Gimeno. A fantastic night and memorable event.

Interview in "speak of..." to wave blue Malaga with Celia Bermejo

Taste of America Malaga interview for the program "talk of..." with Celia Bermejo. Weekly program which is broadcast Wednesdays from 21:00 hours and that allows to analyze currently more in depth. Each week highlights two identifying issues of the city and a character who delves into the development of its activity.

Making off for Channel Recording Kitchen with Julius and Natural Aneto

Pictures of the recording of the program in Canal Cocina. Thursday, October 17, 2013

On the occasion of the award for the best contest Canal Cocina and Aneto paella rice, we recorded a program to develop the winning recipe together with the chef Julius Biernet (from the program "the 22 minutes of Julius) in Madrdi along with makers of broths Aneto. The experience was unforgettable... The program, coming soon! 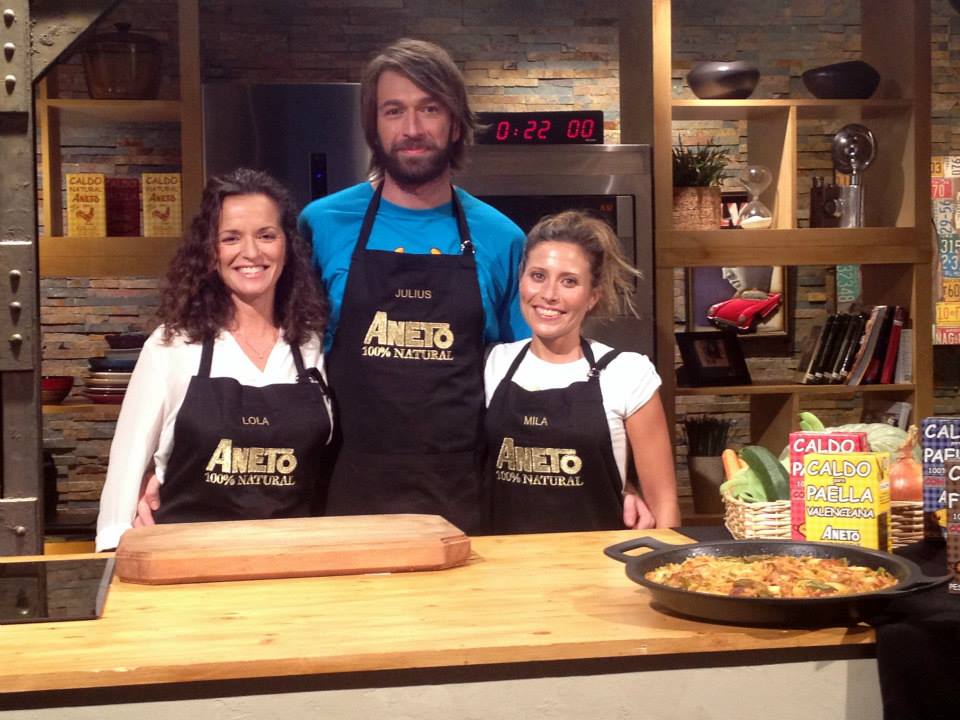 By people of the good table of wave zero Marbella this week became the culinary blogger Lola Bernabé de Loleta, Life, Market and Cooking, which new projects ahead of us. Common spaces came from the hand of the journalist Marcos Chacón, Evelyne Ramelet chef and nutritionist María José Moreno. 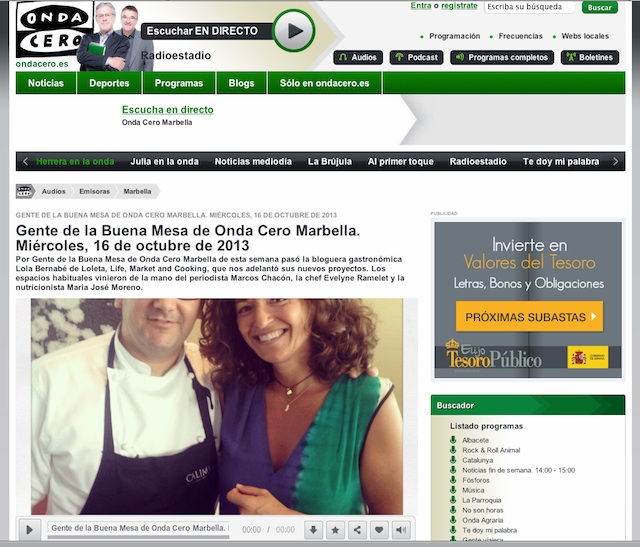 You can listen to the program here.

Second installment of the late night by 101TV, 101 Living Room presented by Roberto López, with the collaboration of Álvaro Carrero, rare David and Raquel Noestá. This program received the visit of the star michelin, José Carlos García, and blogger Cook Lola, Loleta Life Markert & Cooking among others. We also have music from Malaga Youth

Interview in the Opinion of Malaga. Alfonso Vázquez

Appeared in the newspaper on the occasion of the collaboration with the Group of Iberian press (Publisher of La Opinion de Málaga) where it will be linked to the blog. Linking in the image you can see the interview.

Cooking in Mesa and PTV Málaga tablecloth with Ana Gonzalez

Television program devoted to the preparation of live recipes. On this occasion, I prepared a Brownie with cream of cream and mascarpone, strawberries and blueberries

Interview at Onda Azul "Malaga the day" with Celia Bermejo

Interview with Celia Bermejo in the program "Malaga the day" of wave blue Malaga taking advantage of recipes for Christmas. Broadcast by radio. 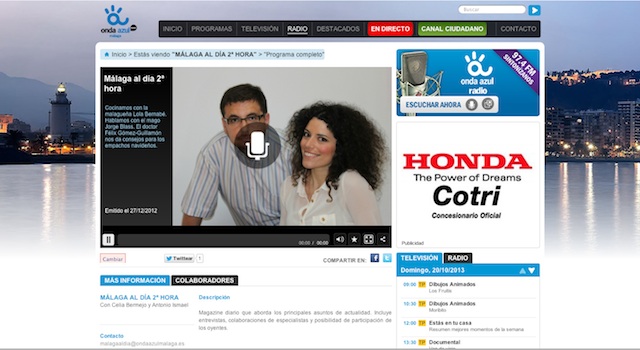 You can listen to the program here. 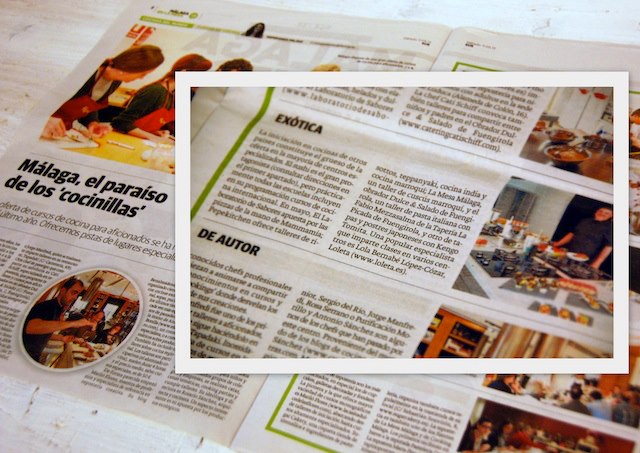 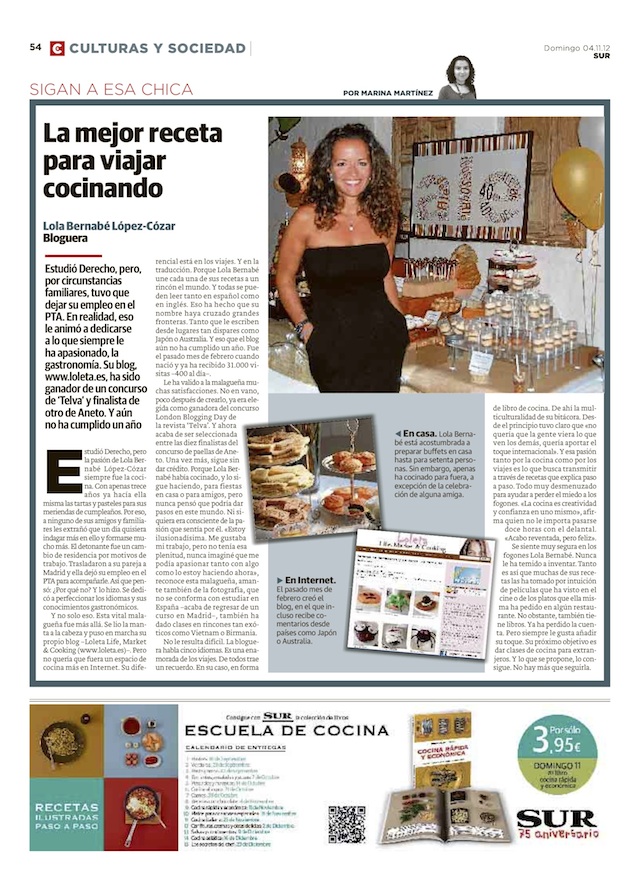 Article in the Opinion of Malaga. Alfonso Vázquez

Kitchen for everyone in the network. Saturday, September 1, 2012

Birthday in Loleta cake: Cho-Ca-that. More than a year together

Ajoblanco | With mango and Porto jelly