Babka of pistachio and chocolate babka. Easy recipe for the most delicious brioche in the world 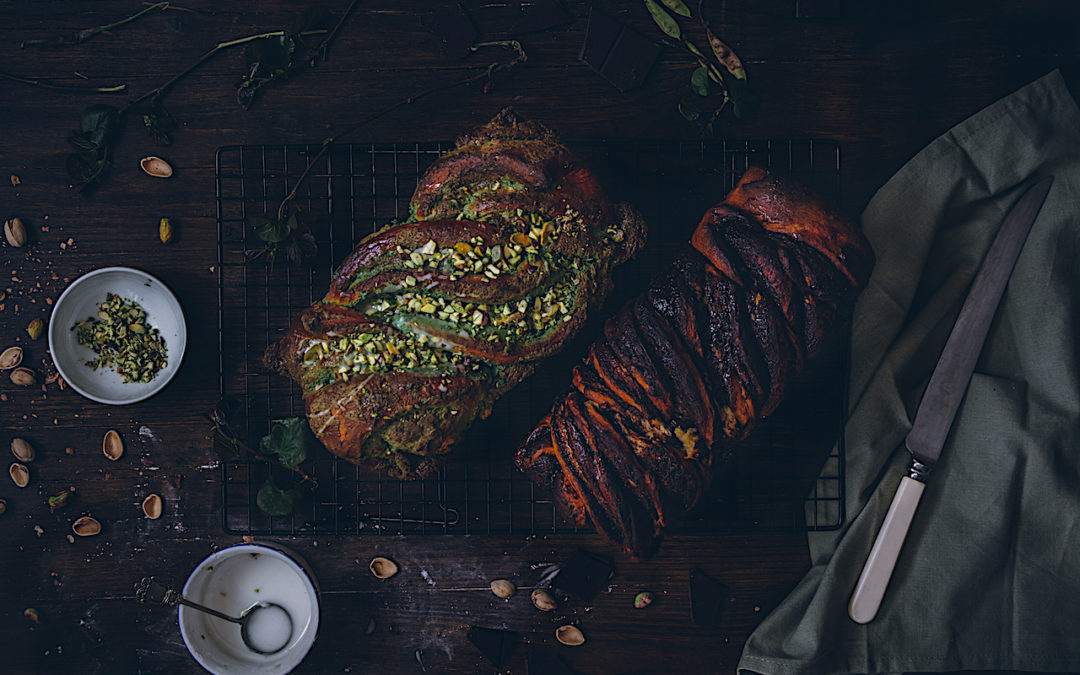 This recipe for Babka of pistachio and chocolate babka is the version of easy recipe for the most delicious brioche in the world.
The babka is a beautiful loaf of Sourdough with origins in Eastern Europe. It's a mass of bread that carries yeast and that is typical of Eastern European Jewish tradition. ; It is in the form of Braid and then allowed to rest and bake in an oven where bread is set aside once it has been filled.
To my I like to prepare you both for breakfast and afternoon snack and I leave the two prepare the recipe with amounts to prepare two, because since we are it spreads much more. That is why I decided to prepare one chocolate and pistachio, so you can decide what you like best.
The most popular filling is chocolate or cinnamon, but today we are going to prepare one of pistachio that is delicious and has become the favorite of my mother. As I say we start a mass similar to the bread brioche easy but we are going to fill in so that it is so beautiful. Let's go for this rich bread that Jews celebrate the arrival of the Passover. 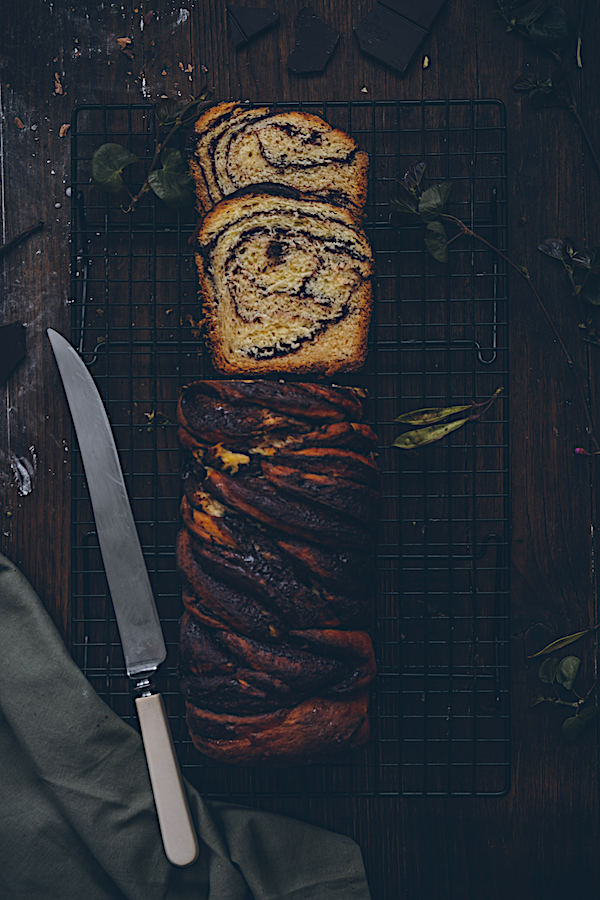 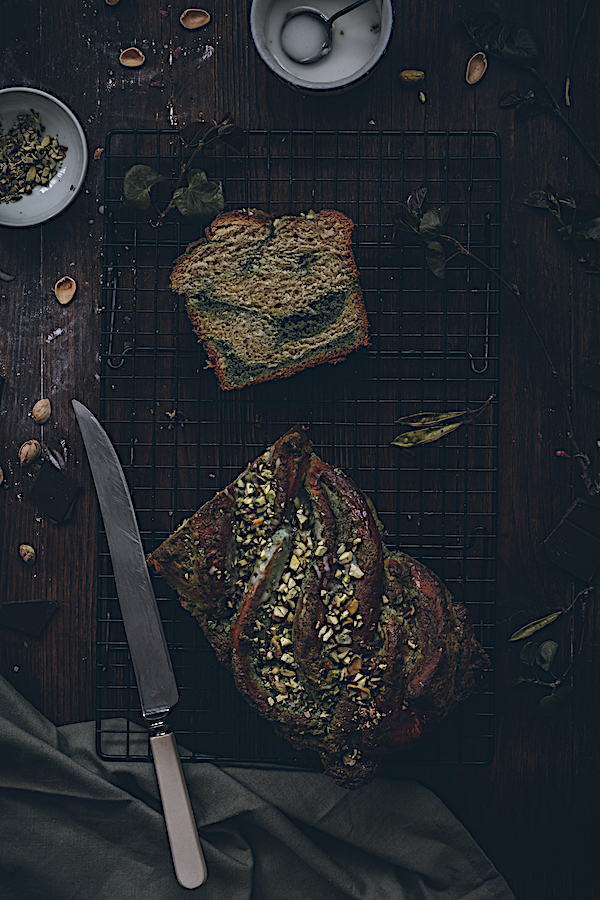 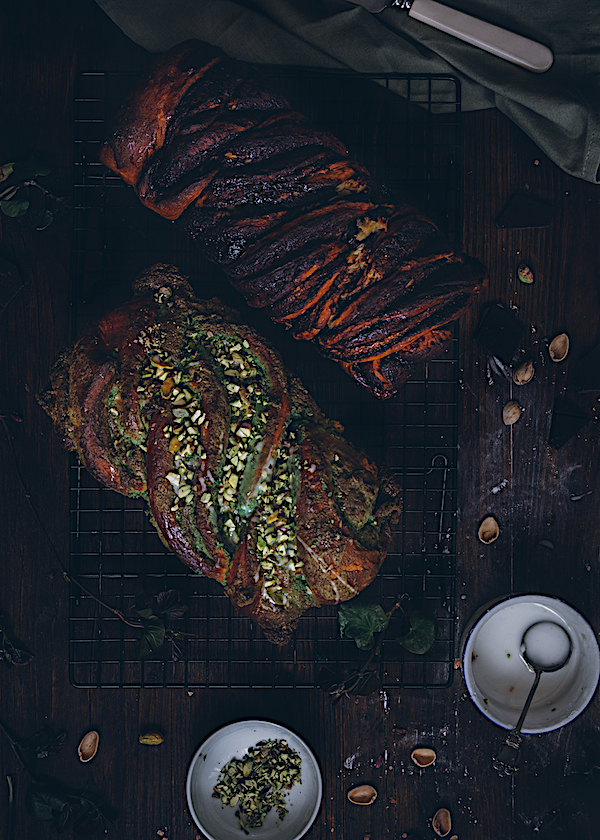 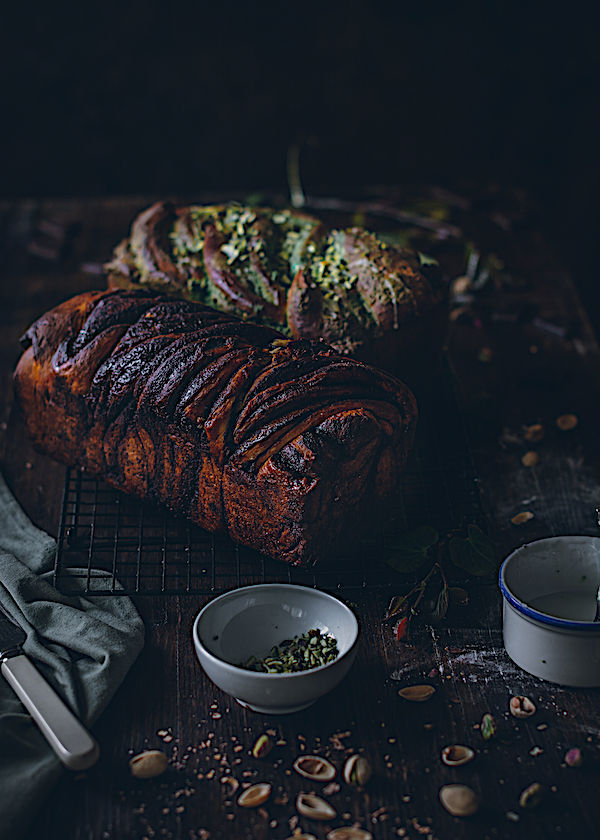 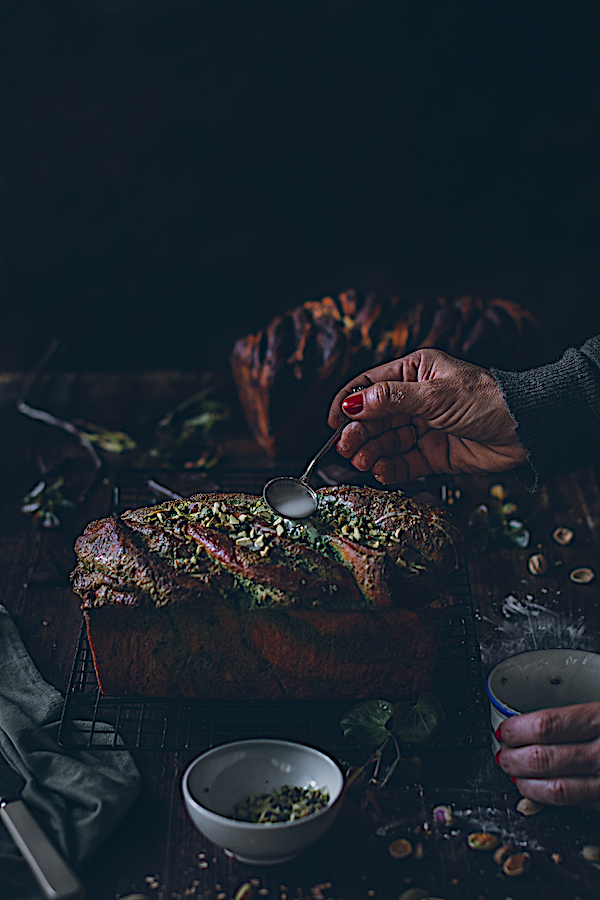 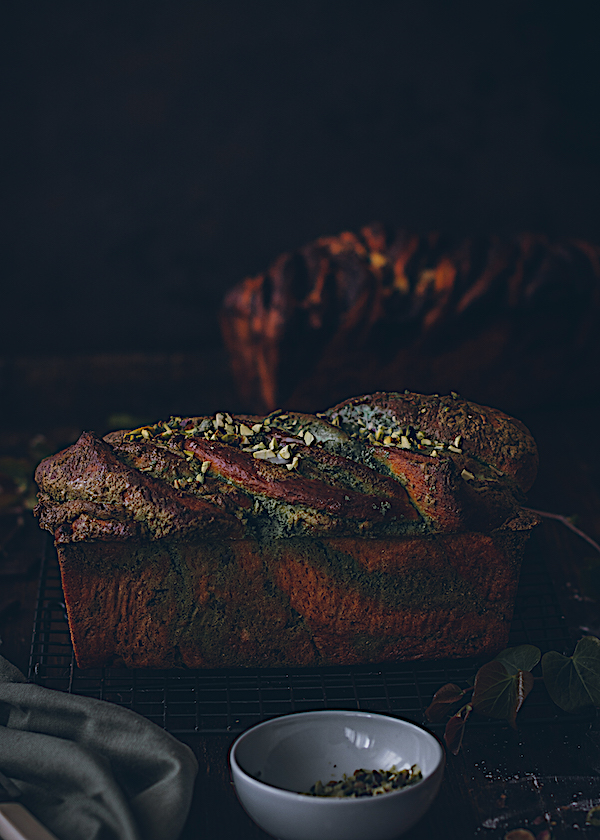 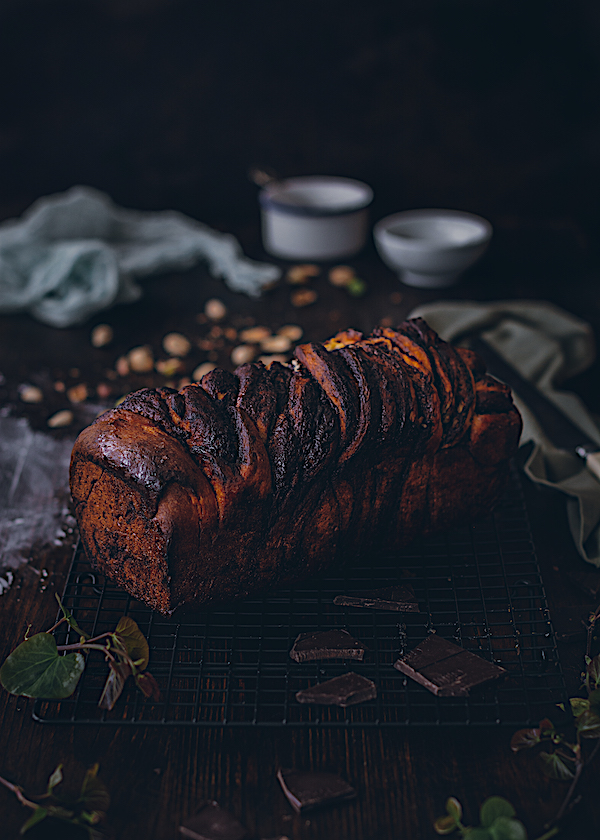 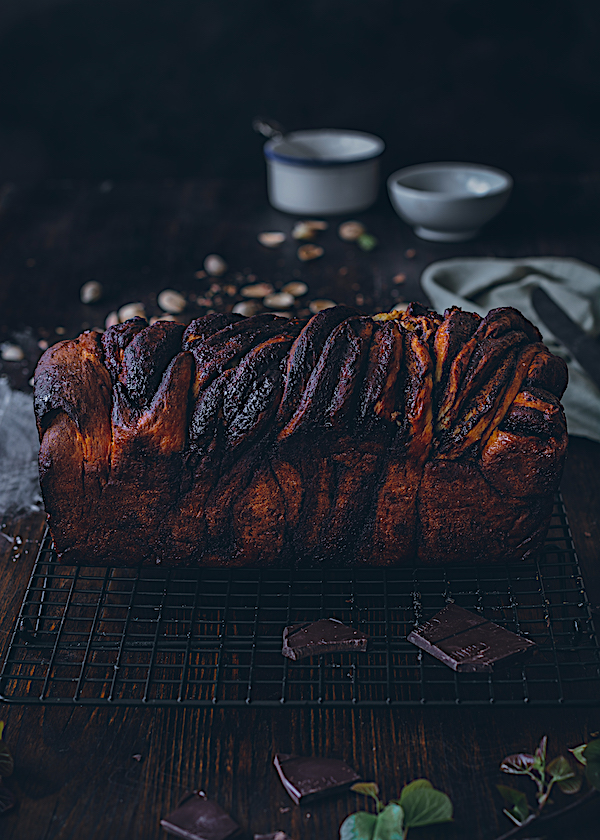 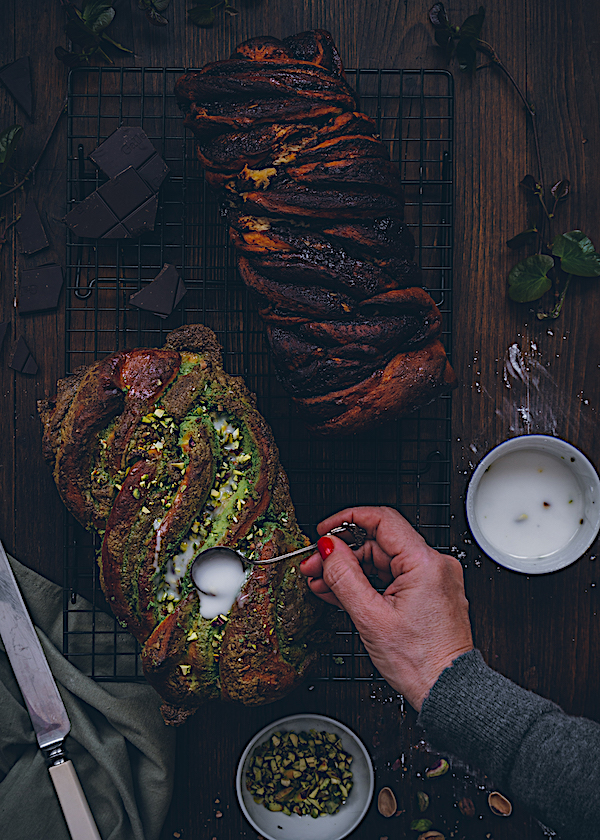 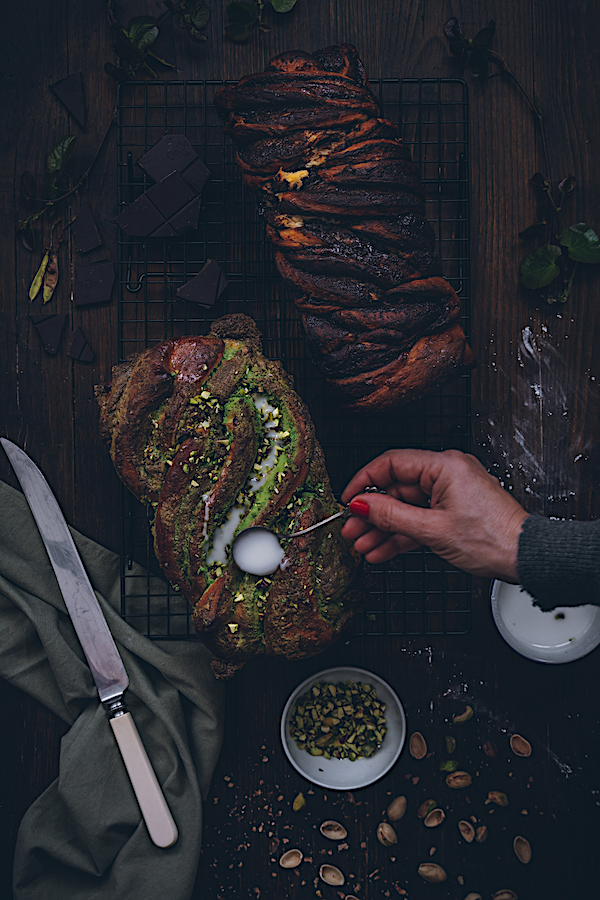 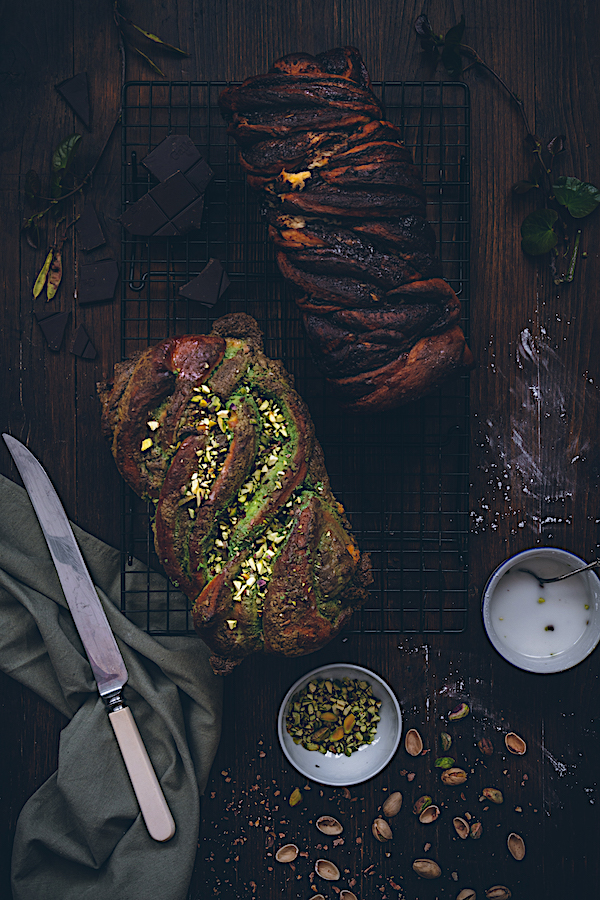 For mixing which are painted

For the chocolate filling (if we want to fill the two loaves with this filler, we have to do twice the amount)

For Pistachio filling (if we want to fill with this filling two breads, we will have to make twice the amount)

For the pistachio paste

For the pistachio paste, cover a baking sheet with baking paper. In a small saucepan, heat the sugar and water until a candy thermometer registers 115 ° C. In a small bowl, put pistachios. Pour the hot syrup over the pistachios, stirring to cover. Transfer the pistachios to the prepared pan and allow to cool slightly, about 10 minutes.
In the bowl of a food processor, place the pistachios and almonds and grind for about 2 minutes until a uniform paste is made. Stop the machine, slowly add the oil and continue crushing for about 6-8 minutes. Keep plugging well (up to 1 month in the refrigerator at umn tupper well covered with plastic wrap) or up to 6 months in the freezer

We started to prepare the dough. In the bowl of an electric stand mixer fitted with the dough hook attachment, mix the flour, sugar, yeast and zest. With the mixer on low speed, add eggs, milk and vanilla. Beat until the mixture together (for 2 to 3 minutes). If the mixture is too dry and crumbly, add 1 tablespoon more than milk, each time until the mass is compact.

With the mixer on medium speed, add the butter, little by little, leaving each piece is incorporated before adding the next. Add the salt and beat just until combined, about 3 minutes. Increase speed and beat until it forms a smooth and elastic dough that is separate from the sides of the bowl. If the dough does not separate vessel, add a little more flour.

Grease a large bowl and place dough inside, oiling the dough on all sides. Cover and let stand in a warm place and draught-free until doubled in size, (I let it stand in oven off and closed for two hours or two hours and a half)

Once the dough has risen, cool down for 30 minutes. I, like let stand overnight in the refrigerator.

Meanwhile prepare the filling of chocolate. In a medium saucepan, melt the chocolate and butter to fire environment, moving frequently to avoid burning, until the chocolate melts and is smooth. Remove from heat and add the sugar, cocoa and salt. Let cool to room temperature before using.

Now let's prepare the pistachio filling. In the bowl of a standing mixer fitted with the paddle attachment, beat the butter and sugar to speed media until it is creamy, about 4 minutes. Add the eggs, one by one, beating well after each addition. In a small bowl, mix the flour and salt. With the mixer running at low speed, gradually add the flour mixture to the butter mixture, beating until blended. Add the pistachio paste and finely chopped pistachios. Beat until combined.

And now we return to the ground. After the time of rest, in a small bowl, lightly beat the egg and water.

Lightly grease two molds with butter or sunflower oil and cover with foil from baking. Book

Divide the dough in half.

On a very lightly floured surface, spread half of the dough on a rectangle of 40 x 30 cm approximately. Using a kitchen brush, paint the edges of the dough with egg

Extend our filling leaving a border of 2 cm on the long sides of the dough. Starting at one short side, roll up the dough, pressing well at the end to seal the end. Using a sharp knife, cut the roll in half lengthwise. Carefully wrap the pieces of dough one around each other and place them in the mold with cuts up repeat with the other piece of dough

Put a paper of baking in one oven tray and put both molds on it. Cover and let rise in a warm place and draught-free (I leave you in the oven off and closed), until doubled in size, between 1 hour and 1 hour and a half.

After this time, remove the Pan and preheat the oven to 175 c bake for 30 minutes. Then cover with aluminum foil and bake about 30 minutes more until entering a stick in Center le, comes out clean.

In a small saucepan, boil the sugar and ½ cup water over medium-high heat, stirring occasionally, until the sugar dissolves. Remove from heat, and let cool slightly. Pour the syrup over the hot bread while still is in the molds. Let cool in molds on the trays for 5 minutes before transferring to a wire rack to cool completely.

Easy recipe for gluten-free pancakes that you don't seem to