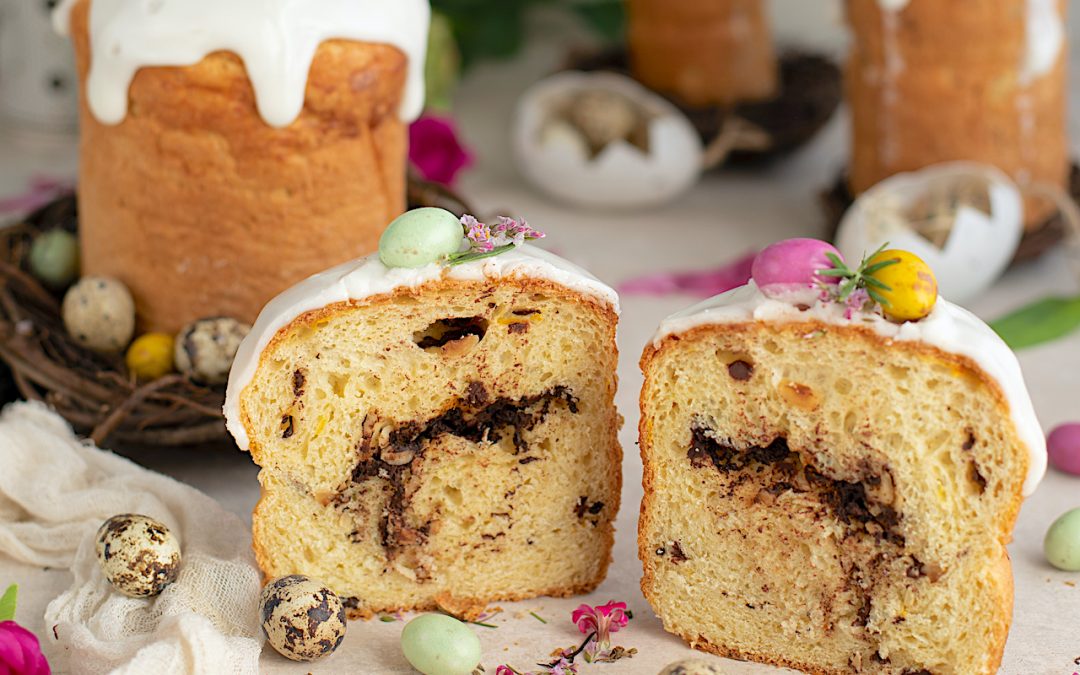 The Kulich, is an Easter bread that is enjoyed in many countries Eastern Europe and in Russia, and that in addition to being beautiful, is characterized because it is very high, more than its base.

The top is rounded and is always covered with a layer of sugar glaze.

Legend has it that the top of this delicious bun covered in the white glaze, represents the dome of a church, and is that it is a sweet with a religious history: always decorated with flowers in the Orthodox tradition is blessed at midnight mass before Easter Sunday. The flowers are usually of the liturgical colors that also represent the entrance of spring and I have accompanied them with a few small Easter eggs.

The dough is prepared with saffron and most of the time it is filled with raisins. However, the rules are to change them and I have filled them with orange zest and a few pieces of chocolate and I assure you that nothing in the world would exchange them for raisins.

The molds are tall and narrow so I used what I had: a can of tomato, another of coffee, a round ceramic bowl and a panetone pan. All well oiled and with a baking paper on the contour that helped the dough rise without leaving the pan. This recipe is my version of Zoe Francois' St. Lucia bun dough but I have modified several ingredients and some amounts.

The buns are typical of Easter, but at home I intend to make them all year round because they are delicious!

To decorate the kulich

In a glass we lightly heat the milk. We put it in a large bowl and crumble the fresh yeast. Add water, saffron, cream cheese, eggs, yeast, salt, sugar, vanilla and cardamom and mix well.

In a medium bowl mix the flour with the cornstarch.

Using an electric mixer equipped with the shovel or T attachment, add the flour mixture to the liquid bowl by alternating it with the melted butter until a smooth dough is formed. There is no need to knead the dough.

We cover the bowl (you know that I use a plastic shower cap for all my masses), and let it stand for 2 hours inside the oven off until it almost doubles in size.

After this time, we let it rest in the fridge until the next day. This rest will make the dough take much more flavor. We can leave it between 4 hours and up to 4 days. It's best to leave the night, but if you prefer you can prepare it one day and bake it a few days later

Grease the molds that we are going to use and place a baking paper all around inside. In principle, it is not necessary, but as I used cans that were not molds I preferred this option to prevent it from sticking, and it worked very well, so I recommend it.

We take the dough out of the fridge and divide it into pieces. My molds weren't the same, so I split the dough in half.

Put some flour on the countertop. Put a piece of dough first and spread with the help of a sprinkled roller with a little flour. We spread half the orange zest and half the knife-chopped chocolate. Cut the iron in half and place one part on top, so that the top is filled and under it the other filling.

We cut into two parts being one large and the other small. Fold the big piece by bending the corners inwards. We turn it over and form a ball by rotating the ball with our hands so that the part of the folds are hidden downwards. We put the ball in the biggest mold.

Repeat with the other piece and put it in the small can.

We cover the molds with some greased film paper but without fixing it. Just dropping it on the molds. We put them in the oven off and let them rest for 90 minutes.

After this time we remove the molds from the oven and preheat the oven to 180oC and put a grid in the center of the oven.

We beat the egg with the water and with the help of a cooking brush, we paint the kulich carefully that the dough does not come down. We baked between 40 and 50 minutes of hanging the size of the mold.

After this time we allow to cool completely before unmoulding. We put the kulich on the grid.

In a bowl, mix the sugar with the orange juice, vanilla and water. We must have a very thick glaze but malleable enough to be able to spread it over the kulich.

We can decorate them with chocolate eggs, some branches of Romero and some flowers

Don't be in a hurry. It's a very easy dough to prepare but it needs its rest time